Farmers have the right to protest peacefully: Supreme Court : The Tribune India

Farmers have the right to protest peacefully: Supreme Court 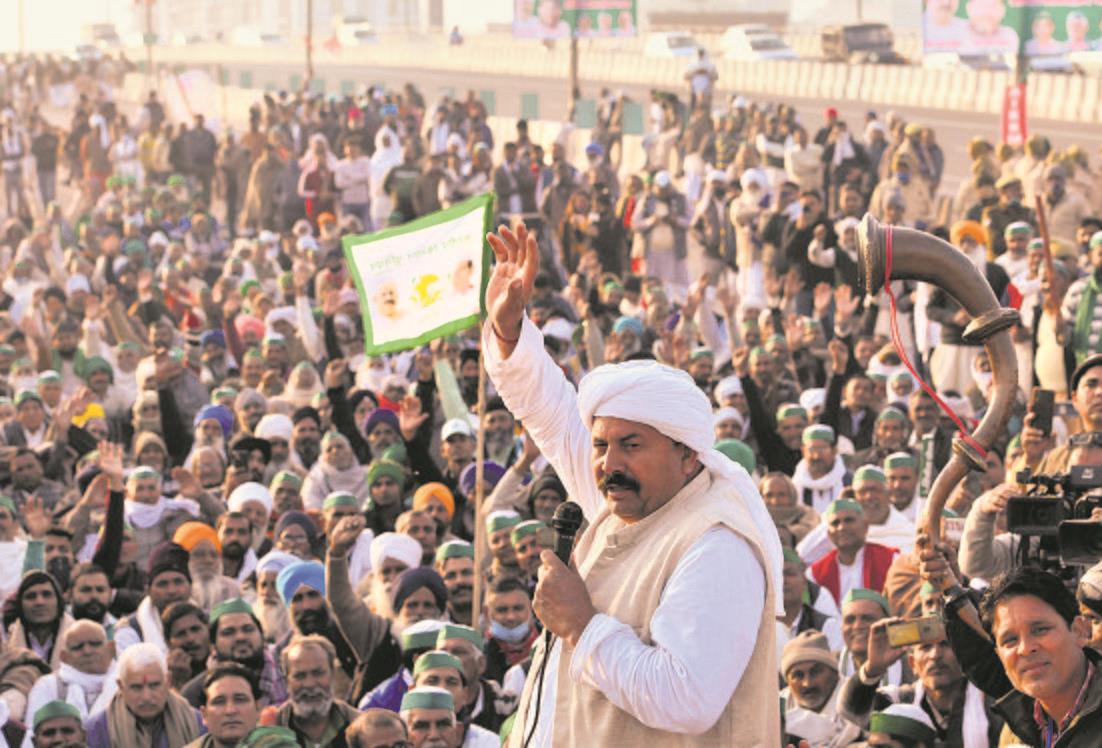 President of the Bharatiya Kisan Union Naresh Tikait during a protest at Ghazipur-Delhi border on Thursday. Photo: Mukesh Aggarwal

The Supreme Court on Thursday refused to interfere with the ongoing farmers’ agitation against the recent farm laws, saying it was their fundamental right.

“We are of the view that at this stage the farmers’ protest should be allowed to continue without impediment and without any breach of peace by either the protesters or the police,” a Bench headed by Chief Justice of India SA Bobde said during a hearing on petitions seeking removal of protesting farmers from Delhi roads.

Agriculture Minister NS Tomar on Thursday wrote an eight-page open letter to farmers, reiterating benefits of the three farm laws, urging them “with folded hands” to consider the facts. He said the govt was ready to give a written assurance on MSP.

“We clarify that this court will not interfere with the protest in question. Indeed, the right to protest is part of a fundamental right and can as a matter of fact be exercised subject to public order. There can certainly be no impediment in the exercise of such rights as long as it is non-violent and does not result in damage to the life and properties of other citizens..,” the Bench, also comprising Justices AS Bopanna and V Ramasubramanian, noted.

Harish Salve, who represented one of the petitioners, argued that no right was absolute, “not even the right to free speech... One can’t hold a city to ransom...” He wanted the court to direct the police to ensure that life in Delhi was not affected by the farmers’ blockade. However, the Bench said it could not pass such an order without hearing the farm organisations. To end the stalemate between the farmers and the government, the Bench decided to constitute a committee of independent and impartial persons, including agriculture experts. However, it said, “This may not be possible without hearing all the necessary parties. Till the parties come before us, it would be advisable to obtain suggestions about the constitution of the said committee from all the parties.” Posting the matter for hearing after the winter vacation, the Bench gave liberty to the parties to move the vacation Bench, if necessary. It also posted petitions challenging the validity of the farm laws after the winter break. The top court sought to know from the Centre if it was ready to defer implementation of the farm laws.

“Can the Union say no executive action will be taken under the laws in order to facilitate negotiations”, it asked Attorney General KK Venugopal, who said he would seek instructions even as Solicitor-General Tushar Mehta remarked: “It will be tough.”

On behalf of the Punjab Government, senior advocate

P Chidambaram said the farmers wanted to march to Delhi were stopped. “The farmers didn’t block any road. The police did it... We want Parliament to convene and MPs to discuss the issue. The state has no objection to court’s suggestion that a group of people can facilitate a dialogue between farmers and the Centre,” he said. Venugopal expressed concern over violation of Covid-19 guidelines.