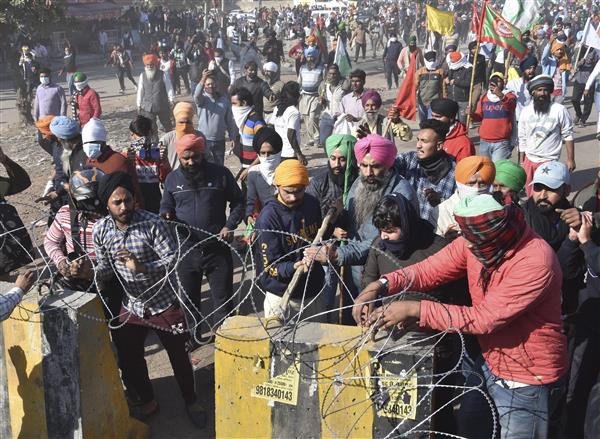 Farmers attempt to cut concertina wire fencing at a police barricade as they march towards Delhi during ‘Delhi Chalo’ protest march against the new farm laws, at Singhu border in New Delhi. PTI

Though farmer jathebandis said entering Delhi is not the only aim as they also wanted a concrete decision on three “anti-farmer” central Acts.

AIKSCC and Sanyukt Kisan Morcha, which earlier wrote to Prime Minister Narendra Modi asking him to begin “sincere dialogue” on the issue, said the “Government of India had to surrender to the will and resolve of farmers of India, to march into the National Capital, to voice their demands and express their resistance against the three black central farm laws”.

“The Union Home Ministry finalised Nirankari Grounds in Burari for farmers’ protest and allowed free passage of farmers into Delhi. This is as per the assertion of farmers that they have a right to come to the capital of the nation to air their grievances,” they said after the decision.

Some farmers, including those who entered via the Tikri border following a stand-off with the police, trickled into the Nirankari Ground in north Delhi where the ruling Aam Aadmi Party has made “arrangements to facilitate farmers to raise their voice against BJP’s tyranny with ‘bulandi’”, those at the Singhu border appear to have decided to stay put for the night.

Slamming the BJP for its “cruelty against farmers”, AAP leader Raghav Chadda said “we will treat farmers as our guests… let the BJP do what it wants, it will pay the price”, adding that AAP will provide the farmers whatever they require like water, toilet facilities etc.

It is not just the Opposition, use of force on protesting farmers from Punjab and Haryana has also drawn criticism from Sangh-affiliate Bharatiya Kisan Sangh which asked the government to identify those “provoking and misleading” them and ensure the agitation is resolved peacefully and MSP guaranteed in open market as well.

As ‘Jathebandis’ at Singhu border decide the next course of action (whether to stay at the national highway or move towards Burari tomorrow) several leaders said their aim is not just to enter Delhi but a concrete action on the three “anti-farmer laws” which the Narendra Modi-led Centre is calling “revolutionary decisions in favour of farmers”.

“Farmers across the country are satisfied while Punjab farmers are being misled for politics,” Environment Minister Prakash Javadekar insisted even as seeking “sincere dialogue”, farmers organisations urged the prime minister to “call the all-India/regional platforms of the farmers for sincere discussions with senior ministers of your Cabinet on demands to repeal the three Farm Acts and the Electricity Bill 2020”.