Fight for OBC, Dalit vote picks up as BJP's 2 ex-ministers, 5 MLAs join SP in UP 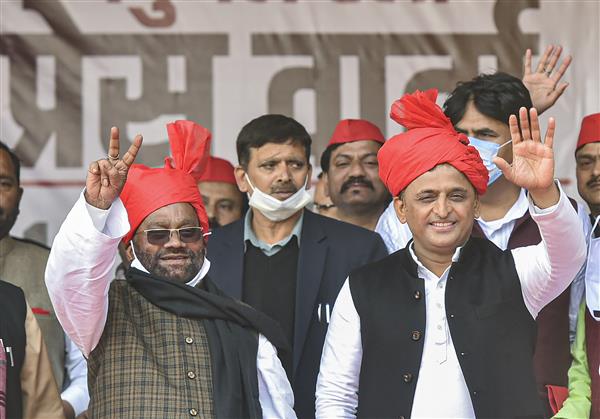 Though a huge crowd had turned up at the SP office in Lucknow to attend the “virtual rally”, leaders denied any violation of Covid norms, stating that no permission was required to have a programme inside the party office.

CM Yogi Adityanath, meanwhile, had a meal at a Dalit household and accused the SP of indulging in “social exploitation” while his five party MLAs Vinay Shakya, Bhagwati Sagar, Roshan Lal Verma, Brajesh Kumar Prajapati and Mukesh Verma joined the SP. By adding non-Yadav OBCs into its fold, the SP aims to shed the tag of being a Muslim-Yadav party. Taking a dig at the recent resignations from the BJP, Akhilesh said: “Wickets gir rahe hein (wickets are dropping)”. Others who joined the SP today were one of the two MLAs of BJP ally Apna Dal who have quit and some former MLAs from other parties. Maurya, whose exit triggered an exodus, vowed to ‘finish’ the BJP in the upcoming polls. Challenging Yogi’s controversial assertion that the UP polls were a “80 per cent vs 20 per cent” fight, Maurya claimed the contest was in fact “85 per cent vs 15 per cent”, 85 per cent being OBCs, Dalits, Muslims, etc.

While BJP leaders term the party-hopping a normal activity during election time, the developments have put a question mark on leadership’s strategy to rely on “imports” to win elections. Similar exits were also seen in West Bengal. Observers said most of those who quit the BJP in UP this week came from other parties with no RSS or BJP background. “They joined the BJP looking for greener pastures and left when the situation became tough. They saw a better deal and deserted. If anyone leaves after serving as ministers, everyone knows it is political opportunism,” they said. However, a section also added that “several loyal and dedicated BJP leaders were ignored and tickets were given to these turncoats. The developments put a big question mark on the BJP’s strategy”.

Notably, many of those who quit Mamata Banerjee-led TMC in West Bengal to join the BJP ahead of the 2021 Assembly elections returned after the saffron party’s defeat, the most prominent being Mukul Roy.

Yogi’s Dalit outreach today came at a time when some OBC leaders have quit the BJP, accusing it of being anti-Dalit/OBC, and have joined the SP. The Chief Minister claimed that during the SP rule there was “social exploitation”, whereas the BJP government was working for the development of every section of society without any discrimination.

“Only 18,000 houses were given to people under the PM Awas Yojana during the five-year term of the Akhilesh Yadav government in UP, whereas the BJP government has given 45 lakh houses to the poor and the deprived,” he said.

2 of them with SP

5 of them with SP

The BJP wickets are falling one after the other. Our CM doesn’t know how to play cricket. — Akhilesh Yadav, SP president

Those in the grip of dynastic politics cannot give justice to any section of society. — Yogi Adityanath, UP CM