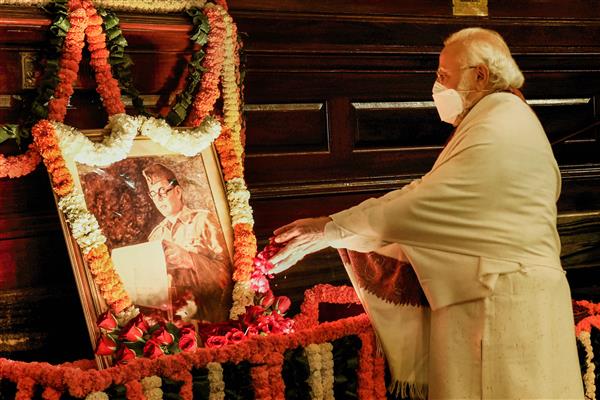 Targeting the Congress, Prime Minister Narendra Modi today lamented that attempts were made after Independence to ignore the contribution of several freedom fighters and asserted that the country was now correcting those mistakes.

After Independence, attempts were made to erase the contribution of many great personalities. Today, the country is correcting those mistakes. PM

Addressing a gathering after unveiling a grand digital statue of Netaji Subhas Chandra Bose at India Gate to mark his 125th birth anniversary, the PM said no power in the world could prevent the country from achieving its goal of building a “new India” before the hundredth year of Independence in 2047.

Netaji’s hologram has been displayed under the India Gate canopy, which once housed the statue of King George V. The hologram, 28 feet in height and 6 feet in width, is powered by a 30,000-lumen 4K projector.

Modi said unfortunately attempts were made to erase the contribution of several great people after Independence. “India’s freedom struggle involved the sacrifices of lakhs of people, but attempts were made to limit their contribution. But today, decades after Independence, the country is correcting those mistakes,” he said. “We are now honouring our national heroes… have built the Statue of Unity in memory of Sardar Patel, are celebrating Bhagwan Birsa Munda’s birth anniversary as Janjatiya Gaurav Divas and have identified and restored places connected with Babasaheb Bhimrao Ambedkar. We are drawing inspiration from our great leaders,” the PM said.

The hologram would soon be replaced by a big granite statue of Netaji. It would be a tribute to his immense contribution to the freedom struggle and be a symbol of the country’s indebtedness to him, the PM said.

The PM also conferred the Subhas Chandra Bose Aapda Prabandhan Puraskar for the years 2019, 2020, 2021 and 2022 in the investiture ceremony. A total of seven awards were presented.

The government has instituted the annual award to recognise the contribution of individuals and organisations in the field of disaster management.