First ever repair of US warship in India; arrives at Chennai shipyard : The Tribune India 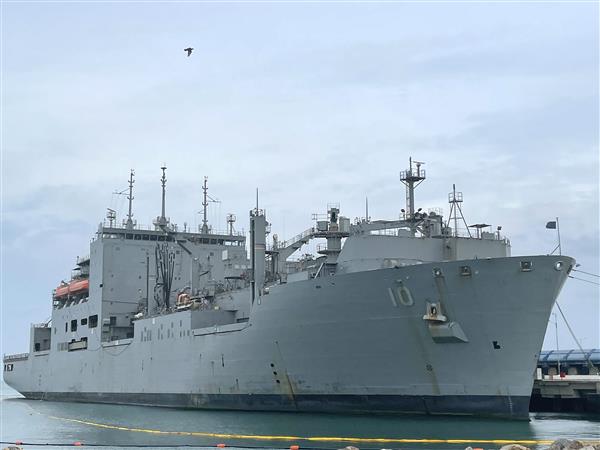 US Navy Ship (USNS) Charles Drew at L&T’s Shipyard at Kattupalli for undertaking repairs and allied services, in Chennai, on Sunday. PTI Photo

Six years after India and the US signed the Logistics Exchange Memorandum of Agreement (LEMOA), an Indian shipyard on Sunday commenced the first-ever maintenance of a US warship at Chennai.

The LEMOA allows either country to pick up fuel, supplies, spares and get repairs done at each other's bases.

Exchange of logistics like fuel and supplies were being done since 2017, the repair or maintenance of a US Navy warship is a significant event in Indo-US ties. US Navy Ship (USNS) Charles Drew arrived at L&T’s shipyard at Kattupalli, Chennai, for undertaking repairs and allied services. The ship will be in Chennai for 11 days.

“This is the first ever repair of a US Navy ship in India,” a statement by the Ministry of Defence said in Sunday.

The US Navy had awarded a contract to L&T’s shipyard at Kattupalli for undertaking maintenance of the ship.

Defence Secretary Dr Ajay Kumar, Vice Chief of the Indian Navy Vice Admiral SN Ghormade were among the senior officials of Ministry of Defence who were at the shipyard to welcome the vessel. Consul General of US Embassy in Chennai Judith Ravin and Defence Attaché at the US Embassy at New Delhi Rear Admiral Michael Baker were also present.

Indian Defence Secretary Dr Ajay Kumar termed the event as a red-letter day for the Indian shipbuilding industry and the Indo-US defence relationship.

India’s initiative also assumes special significance in furthering the strategic partnership between India and the US. It marks the beginning of a new chapter for deeper engagements, the Defence Secretary said.

India has six major shipyards with turnover of nearly $2 billion. Ties between India and the US have been expanding in scale and scope and are based on an open, inclusive and rule-based order in Indo-Pacific and rest of the global common systems.

Consul General of US Embassy Judith Ravin called it as a new leaf in Indo-US strategic relationship signifying the deepening bonds between the two nations.