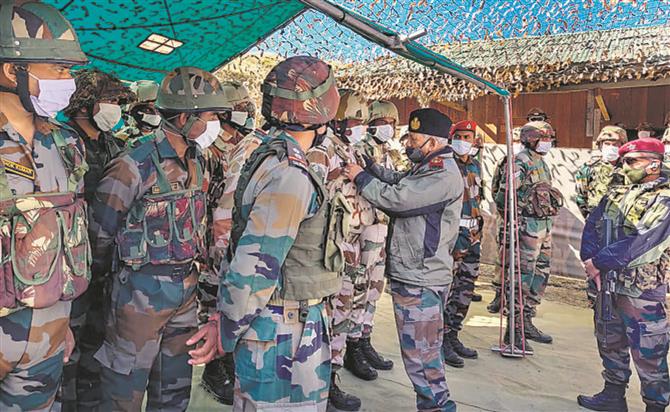 Chief of Defence Staff General Bipin Rawat during his visit to the “forward most air maintained” post in Subansiri valley, Arunachal Pradesh. PTI

Citing security reasons, the armed forces have opposed a proposal of the Ministry of Defence (MoD) seeking to permit geospatial mapping of border and coastal areas by private entities.

At present, all areas up to a distance of 25 km from the land borders or from the coastline require special permission for terrain mapping.

Google Maps, app-based taxi services, food or shopping portals, location services, etc. are among other applications that need mapping data. Service providers in coastal cities need permission from the MoD. Similar is the case with land borders in Punjab, Jammu and Kashmir, Ladakh, Himachal Pradesh and Rajasthan, etc. The proposal through the MoD is to “review the policy on geospatial and geophysical systems” and seeks to allow private entities to freely map the areas falling within the “no-go” zone. It also seeks permission to map the terrain underwater within 12 nautical miles from the coast. The only exception would be the pin-pointed areas that the forces want excluded. At a meeting on December 31, the armed forces opposed doing away with special permission, or allowing un-restricted mapping in “no-go” zones or mapping of underwater terrain, sources said. The armed forces want no change in the process, except minimising the time for okaying or rejecting such permissions.

Software and equipment used in geo-spatial mapping comes from abroad and data of terrain (called elevation mapping) is vital for long-range missiles to travel and hit with precision. This could be compromised, the armed forces have suggested. The US or the European countries that have done such detailed mapping have the equipment to counter its misuse, but India does not have such technology. The Surveyor General, under the Ministry of Science and Technology, maps the terrain for the forces and has achieved an accuracy that allows precision.