Four of the five Indians who died in Nepal plane crash were planning to visit Pokhara for paragliding : The Tribune India

The four hailed from Uttar Pradesh’s Ghazipur district; their families have been contacted 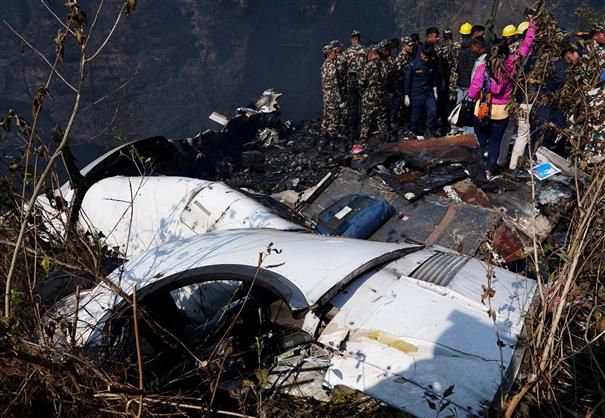 Rescue teams work to retrieve bodies from the wreckage at the crash site of an aircraft carrying 72 people in Pokhara in western Nepal on January 15, 2023. Reuters

Of the five Indians who were feared dead in the plane crash in Nepal on Sunday, four were planning to participate in paragliding in the popular tourist hub of Pokhara, a local resident said.

At least 68 people were killed when a Yeti Airlines passenger plane with 72 people onboard, including five Indians, crashed into a river gorge while landing at the newly-opened airport in central Nepal’s resort city of Pokhara on Sunday, officials said.

Among the five Indian nationals, four had just arrived in Kathmandu from India on Friday.

“All the four were planning to enjoy paragliding in the lake city and tourist hub Pokhara,” recalled Ajay Kumar Shah, a resident of Sarlahi district in southern Nepal.

“We came together from India in the same vehicle, he said.

“They stayed in Gaushala near Pashupatinath Temple and then in Hotel Discovery Inn in Thamel, before departing to Pokhara,” he said.

They were planning to return to India from Pokhara via Gorakhpur, he added.

There is no information about any survivor so far, said Sudarshan Bartaula, spokesperson at Yeti Airlines.

“The families have been contacted. Our Sub Divisional Magistrate and other officials are meeting them,” she said.

“We are also in touch with the embassy. The rescue operation is going on there. It has stopped now at night. It will resume tomorrow. We will do needful after the recovery of the bodies,” she added.

The rescue and search operation was halted on Sunday and will resume on Monday to find the remaining bodies trapped in a deep river gorge surrounded by steep cliffs.

Nepal’s Prime Minister Pushpa Kamal Dahal ‘Prachanda’ has expressed grief over the air crash and has ordered an inquiry into the incident.

Meanwhile, Prime Minister Narendra Modi on Sunday said he was pained by the tragic air crash in Nepal in which precious lives have been lost, including Indian nationals.

“Pained by the tragic air crash in Nepal in which precious lives have been lost, including Indian nationals. In this hour of grief, my thoughts and prayers are with the bereaved families,” Modi said in a tweet and tagged Nepalese Prime Minister ‘Prachanda’.

External Affairs Minister S Jaishankar expressed grief over the air crash and said “our thoughts are with the affected families”.

“Deeply grieved on hearing about the air crash in Pokhara, Nepal. Our thoughts are with the affected families,” Jaishankar said in a tweet.

Civil aviation minister Jyotiraditya Scindia condoled the loss of lives in the plane crash in Nepal and termed it “extremely unfortunate”.