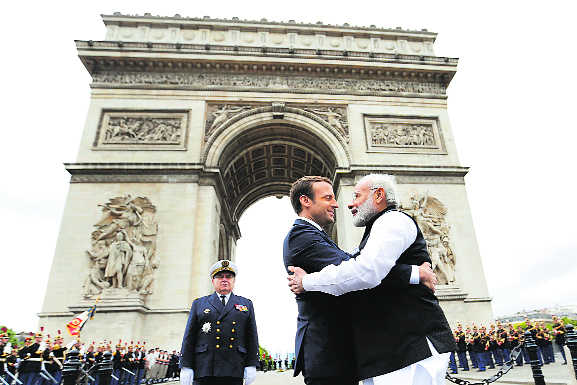 The five Rafale fighter jets that landed on Wednesday at Ambala do not constitute even half a squadron. But their delivery once again brings back the spotlight on France which has remained India’s trusted partner through the Cold War and beyond.

Just two years after India’s independence and a year before US President Dwight Eisenhower’s “Atoms for Peace” speech that opened the doors for multi-country civil nuclear collaboration, France and India had collaborated in a project to extract thorium from monazite sand. It was a dead-end but it in turn led to a partnership that lasted till India conducted its first nuclear test in 1974.

But when India conducted its second nuclear test in 1998, Russia and France were the only major powers that did not succumb this time to the Anglo-US pressure to cancel military and security exchanges.

A year later, France made emergency supplies of ammunition during the Kargil war that was used by Mirage planes for accurate and debilitating strikes on Pakistani sangars on steep mountainsides.

However, French military machines were doing yeoman’s service for the Indian armed forces much before the Mirages arrived. The Cheetah and the Chetak that feed and equip Indian soldiers in forbidding heights are also of French origin.

Military ties, however, began just seven years after Independence. Over 100 Mystere fighter jets from France that joined the Indian Air Force were able to match the American Starfighters in dogfights during the 1965 Indo-Pakistan war.

While more Rafale will keep arriving and some may eventually be assembled here, the close personal ties between French President Emmanuel Macron and PM Narendra Modi may eventually lead to a stronger partnership in the maritime domain, especially in the Western Indian Ocean where the Chinese threat is looming and the US is lukewarm about partnering with India.

India and France have trod that path before. Paris had helped install two listening stations on India’s western coast. These were to be linked with similar ones in Iran and France for a comprehensive coverage of the western Indian Ocean. But the 1979 Islamic revolution in Iran ended that initiative.

With French origin Scorpene submarines being gradually inducted in the Indian Navy, India and France have been revisiting the possibility of partnering in the blue waters.