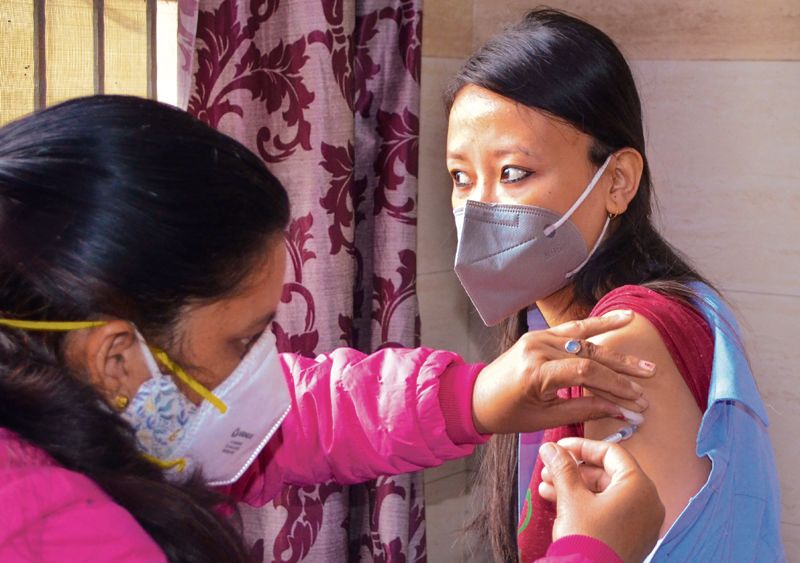 A beneficiary being administered vax in Gurugram on Wednesday. PTI

Covid-19 vaccines are highly effective against infections and hospitalisations even at the height of the Omicron-induced current surge ravaging the globe.

The Health Ministry on Wednesday shared new evidence from the US that reveals over 78 per cent lower chances of Covid infection among the fully vaccinated.

“A study from New York shows that beginning December 13, 2021, once the impact of Omicron became visible, fully vaccinated people showed 78 per cent lower chances of getting infected compared to those not vaccinated,” Health Ministry spokesperson Lav Agarwal said today as India’s active cases soared to 9,55,319, daily cases touched 1,94,720 and positivity rate rose sharply from 1.1 pc on December 30 to 11.05 per cent.

The Health Ministry further cited WHO advisories to say that while Omicron had a growth advantage over the Delta, clinical severity data from South Africa, UK, Canada and Denmark showed a reduced risk of hospitalisation compared to Delta.

“Hospitalisations appear to be low but we need to be vigilant,” Member Health NITI Aayog VK Paul said.

New Delhi: AYUSH Minister Sarbanand Sonowal on Wednesday said the Surya Namaskar demonstration proposed to be held globally on Friday on the occasion of ‘Makar Sankranti’ had assumed significance in view of the current resurgence of Covid-19. He said Surya Namaskar could help a person not fall prey to Covid-19. “It’s a proven fact that Surya Namaskar builds up vitality and immunity and therefore is able to keep corona at bay,” Sonowal said. TNS

The Health Ministry in a letter to states & UTs directed maintenance of medical oxygen buffer stocks of at least 48 hours at all health facilities.

New Delhi: The booster dose of Bharat Biotech-made Covaxin has been shown to neutralise both Omicron and Delta variants of concern of Sars-Cov 2 virus, new study has concluded. TNS