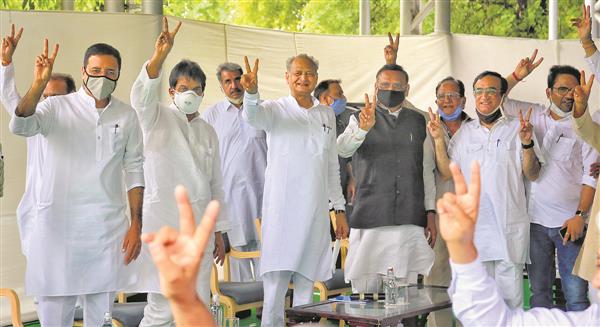 Claiming the support of 106 MLAs, Rajasthan Chief Minister Ashok Gehlot today appeared to have clinched the first round of the ongoing game of nerves with Deputy CM Sachin Pilot, who continued to play hardball on Monday, rebuffing the Congress’ attempts to placate him.

Gehlot came out stronger this afternoon after a Congress Legislature Party meeting at his residence backed his government, demanding strict disciplinary action against any office-bearer or CLP member who worked against the party interests or to weaken the state government. The Congress for its part spoke in contradictory voices on Pilot.

On the one hand, party observer Randeep Surjewala appealed to the rebel Deputy CM and his supporters to return and open a dialogue with the leadership, on the other the CLP resolution targeted Pilot without naming him. Even as Gehlot herded Congress MLAs to a resort near Jaipur after the CLP meeting today, the Pilot camp continued to contest the CM’s claims on having the majority and dared him to take the lawmakers to the Governor instead of a hotel. Leaders close to Pilot maintained the support of at least 20 MLAs in the Assembly, where the Congress has 107 MLAs at present plus the support of allies and Independents, taking its tally to 122. A simple majority in the Rajasthan Assembly is 101 in a House of 200.

The Congress, meanwhile, worked all day to open channels of communication with Pilot, starting with Surjewala asking the rebel leader to attend the CLP meeting and saying Congress chief Sonia Gandhi’s “doors are open” for him.

“Families have differences, but these differences must be resolved internally,” said Surjewala to Pilot, adding that personal ambitions are not larger than the state’s interest.

Although Rahul Gandhi, Priyanka Gandhi and P Chidambaram are learnt to have spoken to Pilot, the latter's camp denied so. Congress sources were still trying to win Pilot back until tonight and felt he had overestimated his strength. There was also talk that Pilot had yesterday met BJP’s Om Mathur with Jyotiraditya Scindia although the Pilot camp denied plans of joining the BJP.

Pilot’s future moves would depend on his bargaining power with the BJP in terms of the party MLAs he can wean away. He may be mulling forming his own party, said Congress leaders. Meanwhile, the Congress has called a meeting of its MLAs tomorrow.