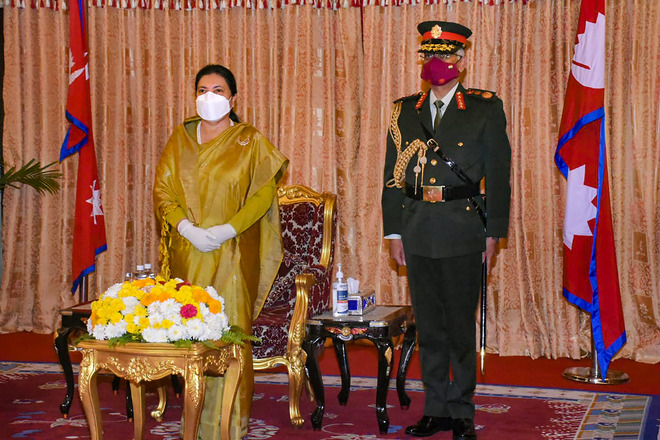 Indian Army chief Gen MM Naravane was conferred the honorary rank of General of the Nepali Army by President Bidya Devi Bhandari at a special ceremony here on Thursday, a decades-old tradition that reflects the strong ties between the two militaries.

Gen Naravane was presented with a sword, insignia and a certificate of conferment order by the President during the ceremony at the President’s official residence “ShitalNiwas”, according to a statement issued by the Nepal Army headquarters.

The tradition, which started in 1950, reflects the strong ties between the two militaries. Gen KM Cariappa was the first Indian Army chief to be decorated with the title in 1950. In January last year, Nepali Army chief Gen Purna Chandra Thapa was also made the honorary General of the Indian Army by President Ram Nath Kovind at a ceremony in New Delhi.

“This long-held tradition is emblematic of the close ties between the national armies of Nepal and India,” the statement added.

After the ceremony, Gen Naravane called on President Bhandari and conveyed his gratitude for the honour bestowed upon him. They also discussed measures to further enhance bilateral cooperation, the Indian Embassy said in a statement here.

Gen Naravane, who is currently in Kathmandu on a three-day visit, earlier in the day met his Nepalese counterpart Gen Thapa at the Chief of Army Staff’s office here and discussed measures to further bolster the existing bond of friendship and cooperation between the two armies.

His visit is largely aimed at resetting the bilateral ties that came under severe strain following a bitter border row early this year.

“They exchanged views on issues of bilateral interests and discussed measures to further strengthen the existing bond of friendship and cooperation between the two armies,” according to the Nepal Army headquarters’ press statement. He was also briefed about the history and current roles of the Nepali Army, according to the statement. He paid homage at the martyrs’ memorial in the Army Pavilion and received a guard of honour in the Army Headquarters. — PTI