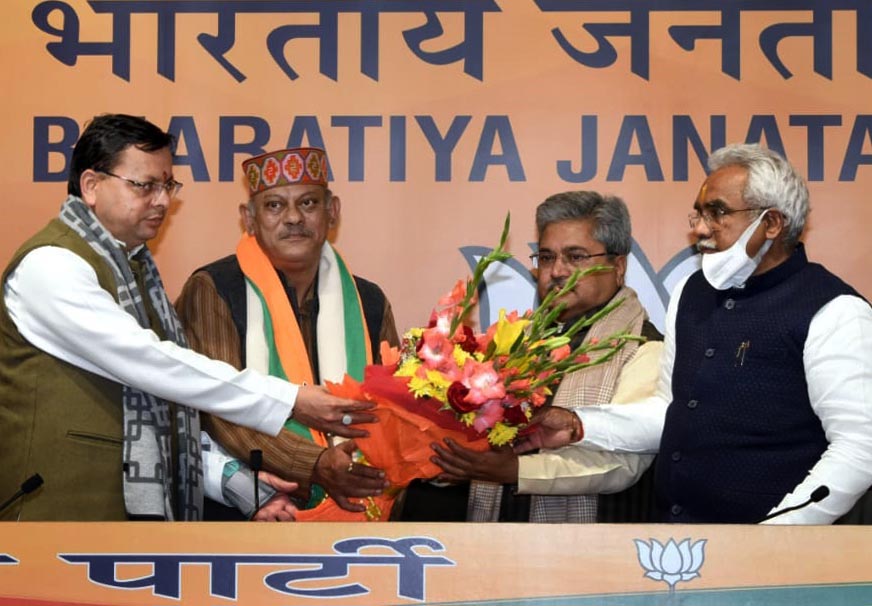 The ruling BJP on Wednesday unveiled its nationalism pitch in election-bound Uttarakhand with the brother of late Chief of Defence Staff Gen Bipin Rawat joining the party in the presence of state Chief Minister Pushkar Singh Dhami and other senior leaders.

Col Vijay Rawat (Retd), 60, served the Army for 34 years and hails from a family whose three generations served in the armed forces.

Welcoming Col Rawat, Dhami saluted the services of India’s first CDS, who, along with wife and 11 other officers, died in a military chopper crash on December 9, 2021.

“I welcome Col Rawat who hails from the family of patriots. Late CDS Rawat was the pride of the country. He always worked for the welfare of Uttarakhand. I am happy to welcome Col Rawat into the BJP and particularly so because I am also the son of a soldier and have great affections for CDS Rawat whose demise left a vacuum in our lives. Col Vijay Rawat will take the ideals of his elder brother forward,” Dhami said, adding that the ruling BJP under PM Narendra Modi had always honoured soldiers and was the only party that would continue to honour the armed forces.

Dhami mentioned the implementation of one rank one pension scheme under the BJP rule to make his point.

The Uttarakhand elections will mainly witness a direct clash between the ruling BJP and the opposition Congress with Aam Aadmi Party also in the fray. The BJP holds 57 seats in the 70-member state Assembly and the Congress has 11. Uttarakhand, created in 2000, has witnessed massive political upheavals, four Assembly elections, 11 Chief Ministers and alternating governments.

Col Rawat said his father, after retiring from the forces, worked with the BJP.

“I am grateful for the opportunity to join the BJP. My father was with the BJP when Uttarakhand was formed. He had then retired and worked with the party. Now, I have been afforded the same opportunity after my retirement. The PM’s vision and his out-of-the-box thinking have inspired my decision,” Col Rawat said hailing the leadership of Dhami. Born in Dehradun on July 4, 1962, Col Rawat served in Sikkim, Rajasthan and Kashmir.

New Delhi: Trivendra Rawat, former Uttarakhand CM, has written to BJP chief JP Nadda offering to opt out of the state polls and devote himself to organisational work. An MLA from Doiwala, he was replaced as CM by TS Rawat in March 2021. TS Rawat was then replaced by young CM Pushkar Dhami. “In changed circumstances, I think I shouldn’t contest,” he said.