When the news of Salil Tripathi’s tragic death reached Twitter, people took upon them to help his family 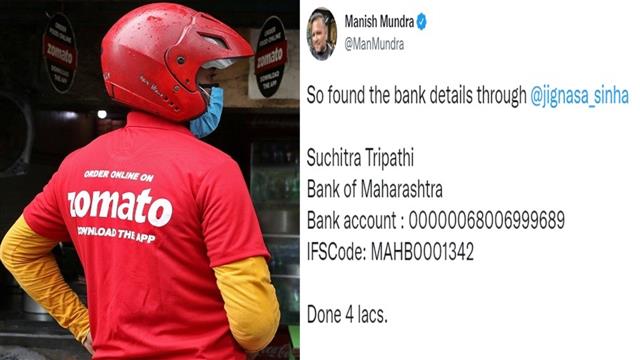 Salil Tripathi was allegedly hit by a Delhi Police constable on January 8. Photo for representation only. Tweet by @ManMundra

On the night of January 8, Zomato delivery agent Salil Tripathi (38) was killed after being allegedly hit by the vehicle of a constable suspected to be drunk in Delhi's Rohini area. Until 2020, when the first lockdown happened, Salil lived a comfortable life with his wife and 10-year-old son. During the first wave of Covid-19, he lost his job and in the second wave, he lost his father. Within a year, this hotel management graduate from Ayodhya, who according to The Indian Express worked in several high-profile hotels, lost his job as a manager at a restaurant in Delhi’s Hudson Lane. Salil then took up the role of a Zomato delivery executive to run his household.

Salil Tripathi was out delivering an order in Rohini in North-West Delhi when he was hit by a constable allegedly driving under the influence of alcohol. The constable rammed his car into Salil’s bike, who then flung into the air and hit a divider. According to the Delhi Police, Salil was the only earning member in his family.

When the unfortunate incident reached social media, people on Twitter took it upon them to help the bereaved family. Moved by the tragedy, filmmaker Manish Mundra decided to her Salil’s family. He first appealed Twitterati to help him find Salil’s wife’s bank account and once that happened, he deposited Rs 4 Lakh in Salil’s wife Sucheta Tripathi’s account and shared the details on his Twitter account. The filmmaker wrote, “It should reflect in the account by tomorrow.”

So found the bank details through @jignasa_sinha

It should reflect in the account by tomorrow https://t.co/Rd9iOAFtda

This one act of kindness caused a snowball effectand in no time other Twitter users joined him to help Salil’s family. Several users then transferred money in Sucheta’s account and shared the screenshots of their transaction as a response to Manish’s tweet. Twitterati came together to appreciate the initiative taken by Manish and did whatever best they could.

Done my part sir. Thanks for motivating us to help others and stand out in crisis situations to needy ones. pic.twitter.com/pnb0BYkBtE

Done 50K. Should be in her account within 2 days. #BeBraveBharatWithYou

Done My Bit..Thank you Bhaiya for Sharing the details.🙏 pic.twitter.com/xYR49NjpEQ

Om Shanti!
I have added a small amount too.🙏
Jai Shriram🙏 pic.twitter.com/9H5x5cWvwe

एक गिलहरी योगदान मेरी तरफ़ से सुचित्रा जी को @DelhiPolice I hope you are preparing a hefty cheque for Sucharita ji so you are taking time..will be waiting for an update… pic.twitter.com/84kkEoctW8

May God give his family the strength in these times. A small help from my end pic.twitter.com/D57YybMPXe

According to a report by a news portal, a fundraiser has been started on Keto and, so far, Rs 8 Lakh have been collected.

My husband Salil tripathi lost his life as delhi policemen hit him by car in drunken state on 8/1/22.Need justice for my husband left with 10 yr old son and his mother..Future is dark for me😭🙏🏻 @ArvindKejriwal @narendramodi @sambitswaraj @PMOIndia @ManMundra @msisodia

Sharing the incident of the fateful night, Sucheta has sought justice for her husband.