Suspended MPs have not shown any remorse, but on the contrary, justified their acts, says V-P Venkaiah Naidu 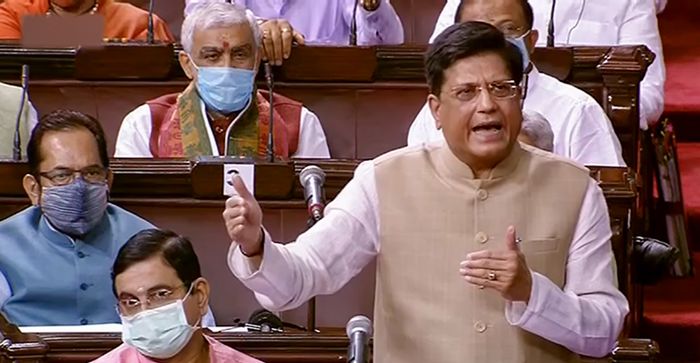 Members of Congress and other opposition parties on Tuesday staged a walkout from Rajya Sabha after Chairman M Venkaiah Naidu justified the suspension of 12 MPs for the entire winter session of Parliament, saying they haven’t shown any remorse for their act of sacrilege of the House in the previous session in August.

“Motion (for suspension of the 12 opposition MPs) was moved, it was approved, action is taken, it is final,” Naidu said as he rejected an appeal by the Leader of the Opposition and senior Congress leader M Mallikarjun Kharge to revoke the suspension.

Naidu said he was not considering Kharge’s appeal as the suspended MPs have not shown any remorse, but on the contrary, justified their acts.

“You try to mislead the House, you disturb the House, you ransacked the table, you also threw papers on the chair and also some of them have got on to the table and then you are giving me lessons. This is not the way,” he said.

“I don’t think the appeal of the Leader of the Opposition is worth considering. I am not considering it at all,” he added.

Raising the issue when the House met for the day, Kharge said the motion for suspension moved by Parliamentary Affairs Minister Pralhad Joshi was in gross violation of the rules and action was taken in the current winter session of Parliament for alleged “unruly” conduct in the last session.

Also, the rules require the chair to name the members before a motion of suspension is moved, which did not happen when the 12 MPs were suspended on a government motion on November 29, he said, adding that the chair had on Monday not even allowed him to raise of point of order, which according to the well-settled conventions of Rajya Sabha is always permitted.

A member named by the chair has to withdraw from the proceedings of the House.

Six of the suspended MPs are from the Congress, two each from Trinamool Congress and Shiv Sena, and one each from CPI and CPM.

Naidu also rejected Kharge’s contentions of action being taken on deeds done in the last session, saying the Rajya Sabha is a “continuing institution” and the Chairman of the House is empowered to suspend members for unruly conduct under rules 256, 259, 266, and other residuary powers.

He said the chair had on August 10, when the opposition members created a ruckus in the House demanding discussion on certain issues, named the members.

“Chairman can take action and also the House can take action. What happened yesterday (November 29) is not chairman taking action, it is the house, after a resolution moved, that has taken action,” he said.

Opposition MPs, however, objected to his comment that the House took the action by passing the resolution by voice vote as they felt only the treasury benches had given affirmative response to the motion moved by Joshi.

“Not the House, except some opposition parties. I agree,” Naidu remarked.

Naidu said the suspended MPs were named by the chair on August 10.

“On 10th August, go through the proceedings of the House, the deputy chairman (who was in the chair) made appeals a number of times. Later, in the (Rajya Sabha) bulletin also it was published about the people who have indulged in this act,” he added.

Naidu did not address Kharge’s charge of him not being allowed to raise the point of order when the motion of suspension was moved on November 29.

Not satisfied with Naidu’s ruling, the opposition parties, including the Congress, AAP, RJD and Left parties protested, raising slogans.

Naidu, however, did not allow them and went on to take up listed zero hour. The opposition MPs then staged a walkout from the House.

TMC members too staged a walkout a short while later after their leader Derek O’Brien said it’s not the opposition but the 80 MPs of the treasury benches who should be suspended as they blocked certain discussions during the previous monsoon session.

Earlier, Kharge said the moving of the motion and its adoption “is a gross violation of rules of procedures regarding the suspension of members provided under rule 256”.

Kharge said the suspension of any member can happen only when two conditions—him or her being named by the chairman and then a motion being moved—are fulfilled.

“In the present case, none of the 12 members have been named on that particular day. Bringing forward a motion to suspend the members months after the day of occurrence alleged disorderly conduct is not in order. The unprecedented, undemocratic action is a violation of the rules,” he said.

He demanded that the suspension of 12 members may be revoked.

“I request you, sir... we all members came to your house we requested you to revoke it and it has been dealt selectively. There are some members who have nothing to do with this. This incident happened in the last session how can you take this (action),” he said.

He was referring to the leaders of 16 opposition parties meeting Naidu earlier in the day.

Later Naidu said there were 33 members who are named for the August 10 incident, out of these 12 members were suspended.

“Some people are complaining we should have been given another opportunity. Another opportunity to say what?” he asked. “And after this action, some of the members who have suspended their reaction outside their comments outside under their TV (bytes) also are very much there.”           He said it’s a “really unfortunate situation that as a chairman, I’m not happy to take action on anybody for that matter, comment on anybody, but at the same time, I have a sacred duty to see that the house is run. At the end of the day, people are going to question the chair and the house, not the individuals and I am answerable to that.”

“That’s why time and again I’m appealing,” he said.

Referring to the refrain of bills being passed in the din, he said, “you create a din, whoever creates din, and then you don’t participate (in debate)”. Members are called by they don’t speak, he said.

“I’m afraid if we continue this trend. If you continue this trend, people will lose their faith in the system which is very harmful to the country and to the system. Yes, protest... you made your point. You walked out. You got every right to walk out. And I also appeal to the house... somebody is walking out. Please don’t make any comments. It is their right to walk out to talk out democratically and walk out and then go to the people create momentum,” he said.

Naidu said he is not here to defend the government but to see that the members do not offend the parliament, offend the people. “This has to be understood by one and all.”

“There are instances as I said ... the action was taken for what they have done outside in this house and I remember during the division of the state of Andhra Pradesh, the action was taken a large number of people.... And it is wrong to say it’s anti-democratic. It is to protect democracy action has been taken,” he said. “So there are precedents. Keeping all these things in mind, I hope that everybody will realise and members who walked out they will come to the house again, participate in the discussions and debate and do justice to the mandate given by the people to them.”  — PTI