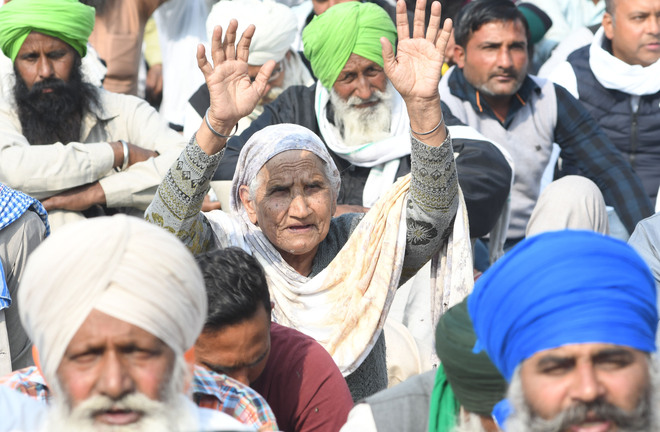 Farmers protest against the new agri laws at the Singhu-Delhi border on Thursday. Mukesh Aggarwal

The Centre again today invited farmers for talks, reiterating its readiness to discuss all issues. However, like his letter dated December 20, Joint Secretary Vivek Aggarwal neither mentioned the time nor date of the proposed meeting. Effectively throwing the ball in the court of farmers, he said the meeting with "high-level ministerial panel" would take place in the Vigyan Bhawan at the time and date of their choice.

In a joint statement on Thursday, leaders of 11 Opposition parties demanded repeal of the three farm laws. They also termed the allegations levelled by Prime Minister Narendra Modi, who has accused the parties of lying to the farmers, as “baseless”, stating that such accusations were a “complete travesty of truth”.

Helipad dug up, Dushyant’s visit off

Deputy CM Dushyant Chautala’s visit to the Uchana Kalan segment in Jind was cancelled after protesters dug up a helipad on the school premises where his helicopter was to land. TNS

Farmer unions rejected the letter terming it yet another “delaying tactic” by the government. Leaders of various unions will hold a meeting tomorrow to decide the further course of action. They want a written assurance on the MSP “even though that is not a part of the three laws”.

The letter is addressed to 40 unions of the Sanyukt Kisan Morcha and not just Krantikari Kisan Union president Darshan Pal, main addressee of the previous letter.

The agitating farmers remain steadfast in demanding the repeal of new laws, while the Centre remains firm on not doing so. It is, however, ready to make amendments that the farmers want.

BKU (Lakhowal) general secretary Harinder Singh said, “There is nothing new in today's letter. The government is sending these letters merely to show that it is serious about talks so that it can propagate that the farmers don't want a solution. PM Modi has the time to talk to farmers in Kutch and other parts of the country, but not for the farmers sitting in the cold at his doorstep.”

Jagmohan Singh Patiala, general secretary of the BKU (Dakaunda), said, “Earlier, the government was playing meeting-meeting with us, and now it's playing letter-letter.”

The Kisan Mazdoor Sangh from Baghpat has, meanwhile, extended support to the government on the three laws. Ahead of PM Narendra Modi's mega outreach to farmers on the birth anniversary of late PM Atal Bihari Vajpayee tomorrow, Agriculture Minister Narendra Singh Tomar said its leaders told him that “the government should not succumb to any pressure on the laws”. There were also reports of rallies being held at some places near Delhi in support of the three laws.