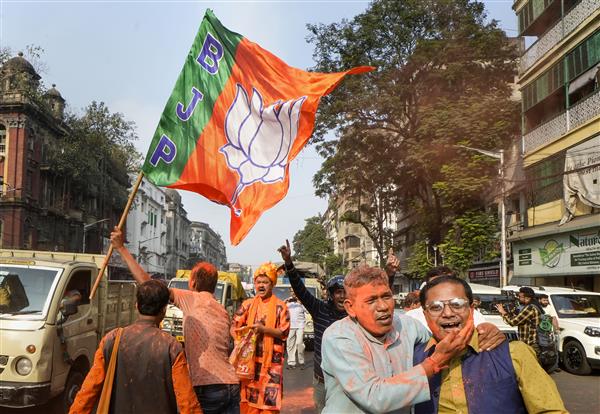 The ruling BJP headed towards a historic win in Gujarat with leads indicating the party would win more than 150 seats, the record the Congress had set in 1985.

The BJP is set not just to surpass its own record of 127 seats which it won under then CM Narendra Modi in 2002, it may also set a new record in the state.

The Congress on the other hand stands restricted to 16 seats, an all-time low for the grand old party that dominated the politics of the state for early decades peaking in 1985 under then CM Madhav Sinh Solanki whose KHAM (Kshatriya, Harijan, Adivasi and Muslim) combine worked wonders for the party.

AAP is ahead on just four seats.

The BJP may also look to bag over 55.5 per cent votes, the highest any party ever won in the state, the Congress in 1985.

The BJP appears to have won back the entire Patidar voter base it lost to the Congress in 2017 when the Congress won its best seats 77 since 1985.

The BJP has also won majority of the state’s rural, tribal and OBC seats, and is doing reasonably well even in Muslim-dominated seats in early trends in the state.

The Congress won the Danilimda Assembly seat despite splitting votes with the AAP. PTI

Cricketer Ravindra Jadeja's wife Rivaba Jadeja was set to win on her debut into electoral politics as she took a massive lead over her nearest rival in the Jamnagar North constituency.

After 15 rounds of voting, Rivaba Jadeja had won 77,630 votes, while her nearest rival Karshan Karmur of Aam Aadmi Party had polled 31,671 votes, the Election Commission said.

Chief Minister Bhupendra Patel on Thursday credited Prime Minister Modi for BJP's landslide victory in Gujarat and said the people of the state have rejected the anti-national elements in the Assembly election.

The new chief minister of Gujarat Bhupendra Patel will be sworn in on December 12 at 2 pm, state BJP chief CR Paatil said.

The state president of AAP, Gopal Italia, is losing to sitting BJP MLA Vinod Moradiya in Katargam seat in Surat, the diamond and textile hub that the party had sought to make its launch pad for entering Gujarat's poll arena.

Congress leader Paresh Dhanani, who has won the Patidar-dominated Amreli assembly constituency in three elections, on Thursday appeared headed for a shock defeat as early trends showed he was trailing his rival from the BJP by more than 5,600 votes.

Gujarat Assembly polls: BJP ahead on 147 seats, Congress on 19, AAP on 6 and others on 4 seats, says Election Commission.

Gujarat Assembly polls: BJP ahead in 123 seats, Congress in 22, AAP in 10 and others in 2 seats, says Election Commission.

As counting of votes for Gujarat Assembly polls began, BJP candidate Hardik Patel predicted that his party would win over 130 seats, the most by party till date in the Gujarat Assembly elections.

08:37 08 Dec
Counting of EVM begins after counting of postal ballots

Counting of ballots cast in the Gujarat Assembly elections started on Thursday across 37 centres amid tight security. For the first half an hour, ballot paper votes were counted.

Gujarat has 182 Assembly seats and the majority mark is 92. Exit polls have predicted that the BJP will comfortably win a seventh straight term.