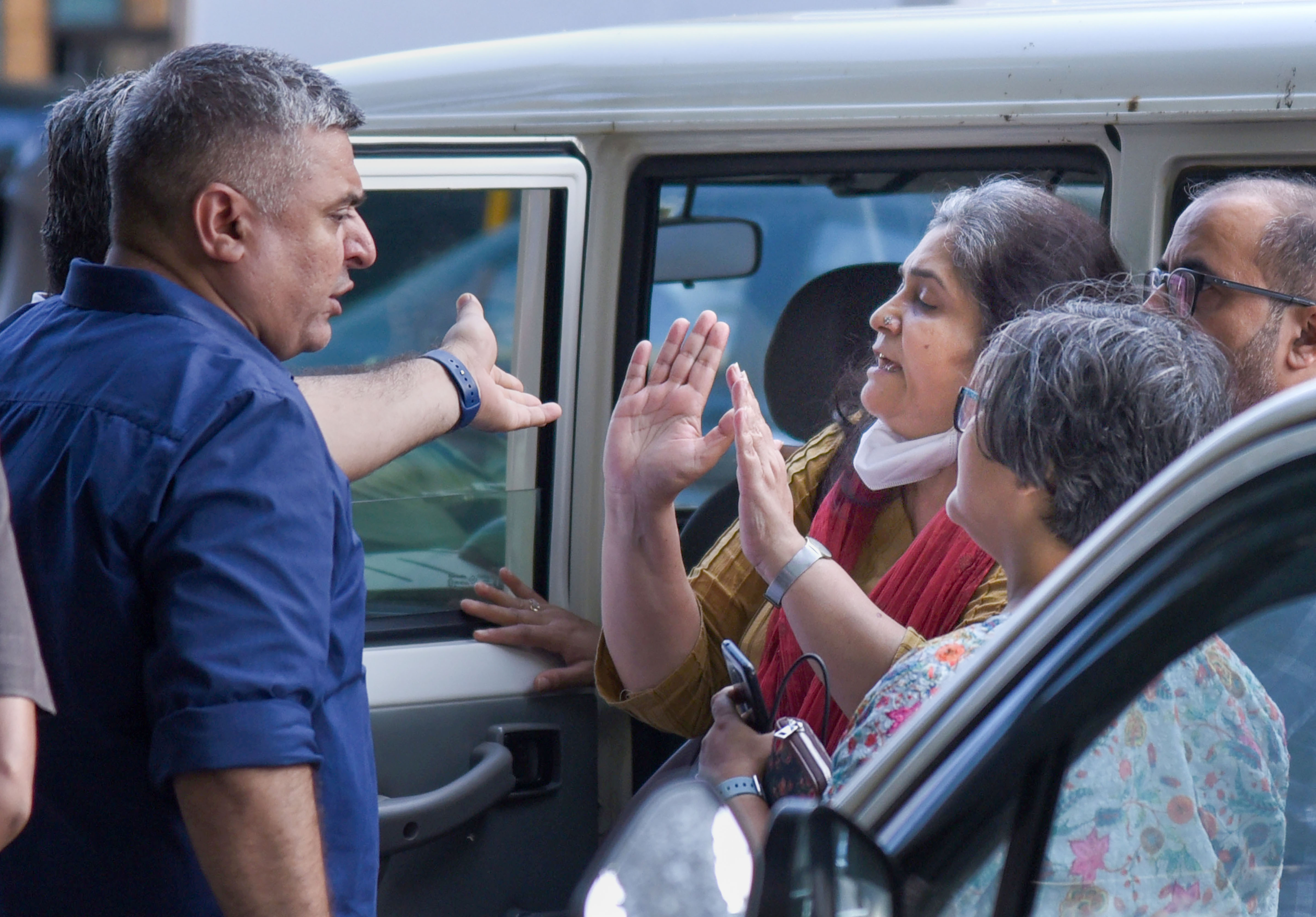 Activist Teesta Setalvad at Santacruz police station after being detained by Gujarat police, in Mumbai on June 25, 2022. PTI

A day after detaining social activist Teesta Setalvad in Mumbai, the Gujarat Anti-Terrorist Squad (ATS) handed her over to the Ahmedabad crime branch early on Sunday in connection with a fresh case of forgery, criminal conspiracy and insulting criminal proceedings to cause injury registered against her.

Setalvad was detained from her house in Juhu area of Mumbai on Saturday afternoon after an FIR was registered against her at the Ahmedabad crime branch earlier in the day based on a complaint lodged by a crime branch inspector D B Barad.

“After being brought here, Setalvad was handed over to the city crime branch on Sunday morning. She will soon be placed under arrest,” a crime branch source said.

After her detention on Saturday, she had been taken to the Santacruz police station in Mumbai for informing the local police about her detention. From there, the Gujarat police squad brought her to Ahmedabad by road, where they reached in the early hours.

The action against Setalvad had come a day after the Supreme Court on Friday dismissed a petition challenging the clean chit given by the Special Investigation Team (SIT) to former Gujarat chief minister Narendra Modi and others in the 2002 post-Godhra riots cases.

Setalvad, who is the secretary of NGO Citizens for Justice and Peace, is also accused of conspiring to fabricate facts and documents, tutor witnesses and abuse the process of law by fabricating false evidence to frame people, on the basis of submissions made before the SIT formed by the Supreme Court to investigate the 2002 Gujarat riots cases and before the Justice Nanavati-Shah Commission of Inquiry.

Setalvad and her NGO were co-petitioner with Zakia Jafri in the petition filed against Modi and others in the Supreme Court. However, the apex court dismissed the petition on Friday and upheld the clean chit given to Modi and others. Jafri’s husband and former Congress MP Ehsan Jafri was killed during the riots.

The FIR registered Setalvad was detained on the basis of an FIR registered on Saturday which accused her and two former IPS officers - R B Sreekumar and Sanjiv Bhatt - of forgery, criminal conspiracy, instituting criminal proceedings to cause injury, among others.

Former DGP Sreekumar was arrested, while Bhatt is currently lodged in a jail after being convicted to life imprisonment in a custodial death case. In another case, he has also been charged of planting contraband to frame a lawyer.

After her detention, Setalvad claimed her “arrest” was illegal and apprehended threat to her life.

The FIR was registered under Indian Penal Code (IPC) sections 468, 471 (forgery), 194 (giving or fabricating false evidence with intent to procure conviction of capital offence), 211 (institute criminal proceedings to cause injury), 218 (public servant framing incorrect record or writing with intent to save person from punishment or property from forfeiture), and 120 (B) (criminal conspiracy).

In its judgment passed on Friday, the Supreme Court had observed, “At the end of the day, it appears to us that a coalesced effort of the disgruntled officials of the State of Gujarat along with others was to create sensation by making revelations which were false to their own knowledge.” “The falsity of their claims had been fully exposed by the SIT after a thorough investigation...As a matter of fact, all those involved in such abuse of process need to be in the dock and proceed in accordance with law,” it had said.

In its judgment, the apex court also noted the objections raised by the respondents on Setalvad as joining as petitioner number two in the plea after Jafri. The respondents objected on the grounds of Setalvad’s “antecedents” and also for her “ulterior design by exploiting the emotions and sentiments of appellant - Zakia Jafri, the real victim of the circumstances.”