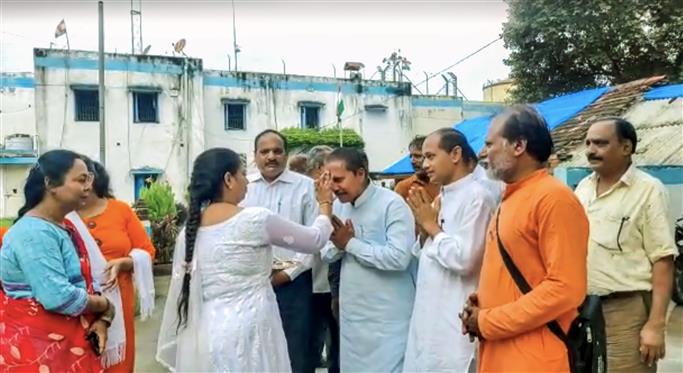 The convicts are being welcomed as they come out of the Godhra sub-jail, in Godhra on August 15, 2022. — PTI

The Gujarat Government’s move of granting pardon to 11 persons sentenced for life in the Bilkis Bano gang-rape triggered more questions on Wednesday   .

The opposition Congress led the charge asking the BJP as to which policy its government in Gujarat invoked to remit the sentences in the heinous crimes that not only involved gang-rape but also murder of seven family members of Bano, including her 3-year-old daughter.

Bano was five months pregnant when she was raped.

Citing Gujarat Government’s claim that the pardon was granted under a 1992 state policy, Congress media department chairman Pawan Khera asked where the policy could be accessed. It is not on the state government website, he said, adding that on May 8, 2013, when Narendra Modi was Gujarat CM, the 1992 policy was abrogated.

”How can the Gujarat Government remit sentences under a policy that does not exist?” Khera asked.

The Congress also flagged other concerns, including the state government’s powers to remit sentences handed out in heinous crimes.

The party cited the Union Home Ministry’s 2014 guidelines that expressly bar grant of pardons to those convicted of heinous crimes.

“When the 1992 state policy does not exist, obviously the MHA policy of 2014 prevails,” said Khera, further asking whether the Gujarat Government informed the Supreme Court, seized of the Bano matter, of the stated 1992 policy in question?

Raising a law point under the CrPc, which mandates states to take the Centre’s concurrence when granting pardons in matters probed by Central agencies, Khera asked, “Did the Gujarat Government seek the concurrence of the Prime Minister and the Home Minister considering the Bilkis Bano case was probed by the CBI. If yes, we will know that PM’s “Nari Shakti” remarks from the Red Fort ring hollow. If not, what action will the PM take against the Gujarat CM?”

The Congress also asked the Gujarat Government to reveal the constitution of the jail advisory panel that recommended remissions for the 11 convicts in the first place.

Khera countered the Gujarat Government claim that it granted the remissions in question based on the orders of the Supreme Court.

”This statement is misleading. The fact is the Supreme Court had directed Gujarat to dispose of the matter within three months. It had not directed the Gujarat Government to grant them this remission,” the Congress leader said questioning the silence of the larger Opposition, including the AAP on the development.

He said, “If we do not ask these questions today, our society will stink and the world will feel the stench.”

Gujarat goes to polls later this year, with the ruling BJP in power in the state since the 1995 Assembly polls.