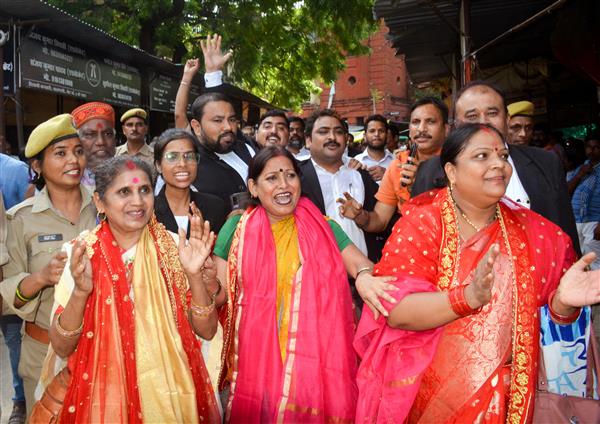 Plaintiffs with their lawyers jubilate after the district courts verdict in the Gyanvapi mosque-Shringar Gauri case, in Varanasi, on Monday. PTI Photo

As India’s second mandir battle began with a Varanasi court ruling that petition of Hindu women for permission to perform pooja at Gyanvapi complex is maintainable, BJP leaders expressed “happiness” and “faith in the judiciary system”.

In the first reaction to the verdict, UP’s Deputy Chief Minister Brajesh Pathak said: “We all respect and welcome the judgement of the court. The people of Uttar Pradesh and the country are all very happy, we were all waiting for the verdict of the honourable court.

“It is our responsibility to establish law in Uttar Pradesh and maintain it. We have informed all the officials to ensure law and order in the state and there should not be any unfavourable incident (due to it). We are ready to handle every situation,” he said. Pathak, however, refused to elaborate on court’ proceedings or the future course of action.

As celebrations erupted in Varanasi after the court dismissed the plea of the Anjuman Islamia Masjid committee challenging the maintainability of the suit filed by the five Hindu women, key BJP leaders hailed the verdict, exuding confidence over the law and Constitution of the country. Individual comments apart, there was no official reaction from the BJP on the issue like during the time when the Ram Janmabhoomi issue was being debated in the court.

Expressing joy, Union Minister Giriraj Singh said: “We fully trust the Constitution and law of the country. The invaders tried to destroy our states, culture, and religious faith, without which India is incomplete.”

Meanwhile, All India Muslim Personal Law Board (AIMPLB) member Maulana Khalid Rashidi said the legal team will study the issue. “We will follow the court’s verdict. After the Supreme Court’s decision on Places of Worship Act after the Babri Masjid case, we were hoping that no mandir-masjid issue would be raised in the country now, but still the issues are arising in the country. Our legal team will study the matter,” he was quoted as saying.

Merakuddin Siddaqui, who represents the Anjuman Intezamia Committee, said the Muslim side will move the Allahabad High Court challenging the lower court’s order. The Committee argued that the complaint filed by the Hindu worshippers is in the nature of public interest, and therefore should be presented before the High Court.