Court notice to Hindu side, posts matter for further hearing on May 19 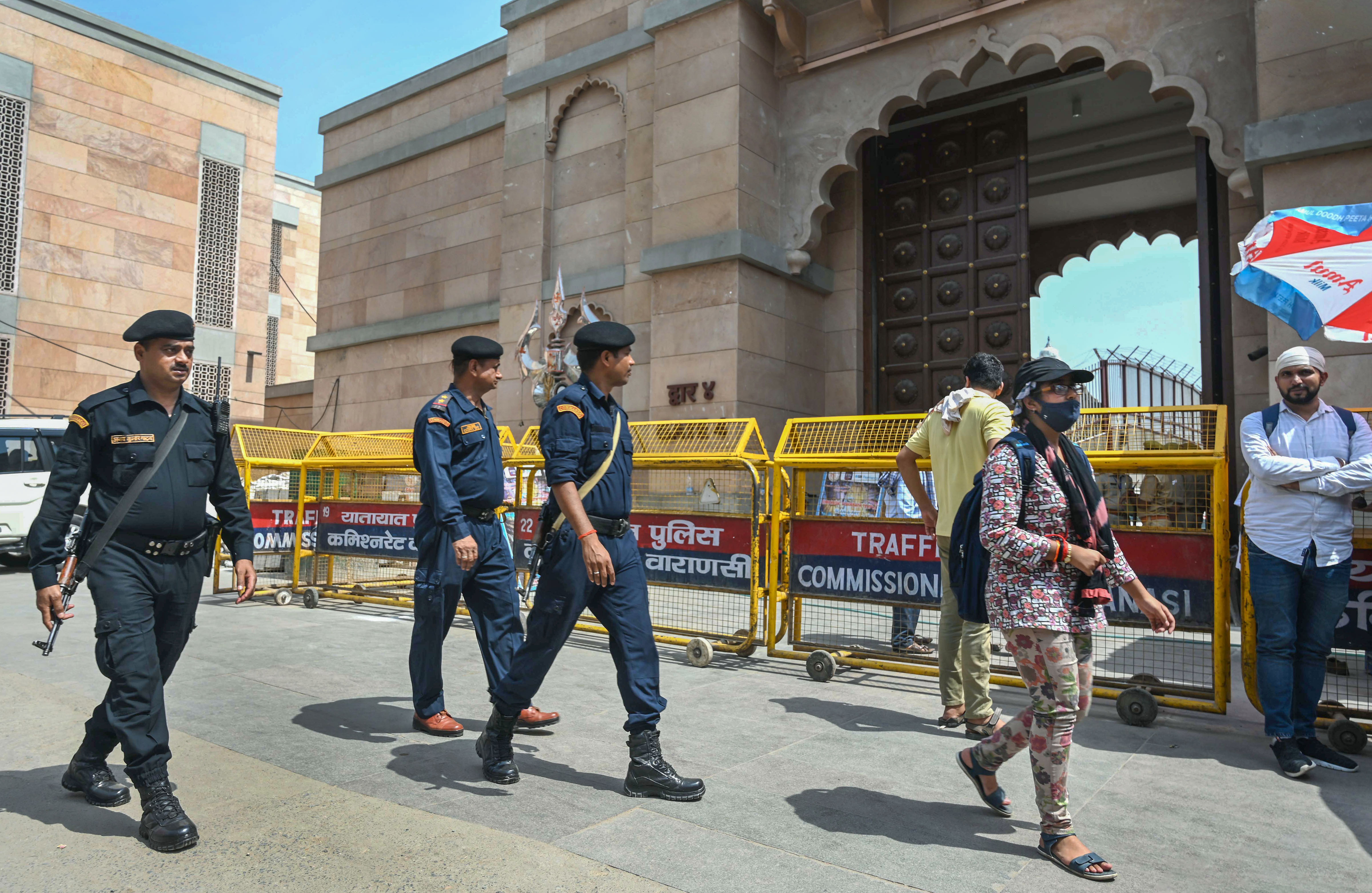 Security personnel guard outside the Gyanvapi mosque after its survey by a commission, in Varanasi on Tuesday, May 17, 2022. PTI

The Supreme Court on Tuesday ordered protection of the area where a ‘Shivling’ was reported to have been found at the Gyanvapi Shringar Gauri Complex in Varanasi even as it clarified that there shall be no restriction on Muslims offering namaz or other religious observances there.

The Bench — which also included Justice PS Narasimha — made it clear that the trial judge’s order that only 20 people will offer namaz at the disputed complex will not operate now.

It issued notice to the Hindu side and posted the matter for further hearing on May 19 after it was informed that advocate Hari Shankar Jain, who represented the Hindu side, was admitted to a hospital in Varanasi.

The order came from a Bench led by Justice DY Chandrachud on a petition filed by ‘Committee of Management of Anjuman Intezamia Masajid’ challenging the Allahabad High Court’s order permitting a local court-appointed commissioner to inspect, conduct survey and video-graph the Gyanvapi-Shringar Gauri complex.

On behalf of the State of Uttar Pradesh, Solicitor General Tushar Mehta urged the top court to pass any material order only after getting a factual report to avoid any unintended consequences.

On behalf of the ‘Committee of Management of Anjuman Intezamia Masajid’, senior counsel Huzefa Ahmadi said the mosque was covered under the Places of Worship (Special Provisions) Act, 1991. He said the trial court’s order was in the teeth of the Act.

Section 4 of the Act bars filing of any suit or initiating any other legal proceeding for a conversion of the religious character of any place of worship, as existing on August 15, 1947.

After a court-mandated videograhpy of Gyanvapi-Shringar Gauri complex discovered a ‘Shivling’ inside its premises, Varanasi Civil Judge (Senior Division) Ravi Kumar Diwakar had on Monday ordered the place to be sealed. Diwakar had ordered the Varanasi District Magistrate to seal the area where the Shivling was found to ensure that no one entered the premises. It had ordered the District Magistrate, the Police Commissioner and the Central Reserve Police Force (CRPF) to ensure that the sealed area remained safe and secure.

On Thursday, the Varanasi court had asked the commissioner to submit the survey report by May 17.

However, on Tuesday it gave two more days to the survey team to submit its final report. It also removed survey commissioner Ajay Mishra following allegations of survey reports being leaked to the media by one of his close aides. However, two other survey commissioners will continue their work.

The civil court’s order had come on a suit filed by Hindus who claimed the mosque housed Hindu deities and that they should be allowed to perform puja at the site. Acting on a plea by a group of women seeking permission for daily worship of Hindu deities located on an outer wall of the mosque, Civil Judge Diwakar had ordered a survey of the Gyanvapi-Shringar Gauri complex.

The Gyanvapi-Shringar Gauri complex, Varanasi, has been a bone of contention between Hindus and Muslims over right to worship at the place. The controversy surrounding the survey of the complex had on Friday reached the Supreme Court which had refused to pass any orders to stop it.