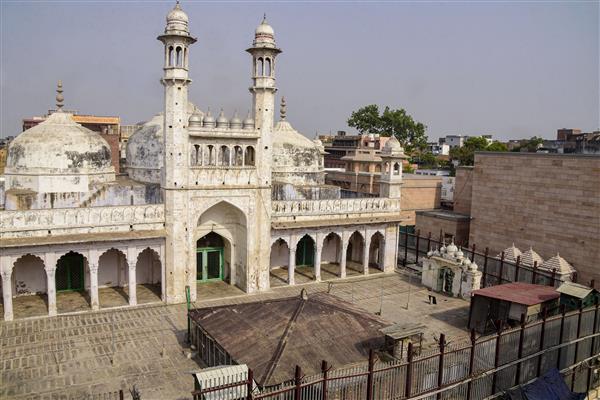 File photo of the Gyanvapi Mosque after its survey by a commission, in Varanasi. PTI Photo

A Varanasi court on Monday held that a petition filed by five Hindu women seeking permission to perform daily worship of Hindu deities located on an outer wall of the Gyanvapi mosque was maintainable and it would go ahead with the hearing of the case.

District Judge A K Vishvesh – who was assigned the case by the Supreme Court -- dismissed the plea filed by Anjuman Intezamia Masjid Committee and others challenging the maintainability of the petition seeking permission to perform daily worship at the contested site.

“I have come to the conclusion that the suit of the plaintiffs is not barred by the Places of Worship (Special Provision) Act, 1991, The Wakf Act, 1995 and UP Sri Kashi Vishwanath Temple Act, 1983, and the application 35C filed by the defendant no. 4 (Anjuman Intezamia) is liable to be dismissed,” Vishvesh said in his 26-page order.

The District Judge posted the matter for further hearing on September 22 to adjudicate on the petition seeking the right to worship deities on the outer wall of the mosque complex near the Kashi Vishwanath temple.

The Muslim side’s counsel Merajuddin Siddiqui said he will move the Allahabad High Court against the district judge’s order.

Five Hindu women -- Rakhi Singh from Delhi and Sita Sahu, Manju Vyas, Laxmi Devi, and Rekha Pathak from Varanasi had had moved the local court on August 18, 2021 seeking permission to perform daily pooja at the Shringar Gauri shrine located at the north-west wall of the Gyanvapi mosque. The petitioners had contended that they had been allowed to perform daily pooja at the site until 1993, even after the enactment of the Places of Worship Act in 1991.

The Anjuman Intezamia Masjid Committee has maintained that the Gyanvapi mosque is a Waqf property and contended that the plea filed by Hindu women was not maintainable.

“Their (Muslim side) plea regarding the Place of Worship Act was rejected by the court. The court said that the suit is maintainable, and the next hearing in the matter is on September 22,” advocate Vishnu Shankar Jain, who represented the Hindu side, told reporters.

Prohibitory orders were in place ahead of the order. As the news came, some people were seen distributing sweets outside the court.

The Supreme Court had on May 20 handed over the trial of the suit for permission to worship Hindu deities inside the Gyanvapi Complex to the Varanasi District Judge, saying it needed to be handled by a "slightly more experienced and seasoned" officer from the UP Higher Judicial Service.

Till then, the interim order passed by the top court on May 17 for protection of area where a court-mandated survey panel found a ‘Shivling’ and allowing free access to Muslims to offer namaz in the mosque should continue, a three-judge Bench led by Justice DY Chandrachud had said.

The top court had noted that the process to ascertain the religious character of a place of worship is not barred under the Places of Worship Act of 1991. Earlier, it had ordered protection of the area where a ‘Shivling’ was found during a court-ordered survey at the Gyanvapi Shringar Gauri Complex in Varanasi and clarified that there shall be no restriction on Muslims offering namaz or other religious observances there.

Acting on a petition filed by ‘Committee of Management of Anjuman Intezamia Masajid’ challenging the Allahabad High Court’s order permitting a local court-appointed commissioner to inspect, conduct survey and video-graph the Gyanvapi-Shringar Gauri complex, the SC had made it clear that the trial judge’s order that only 20 people will offer namaz at the disputed complex will not operate now. (With PTI Inputs)