A video of the incident, which took place at a workshop held here on January 3, goes viral on social media 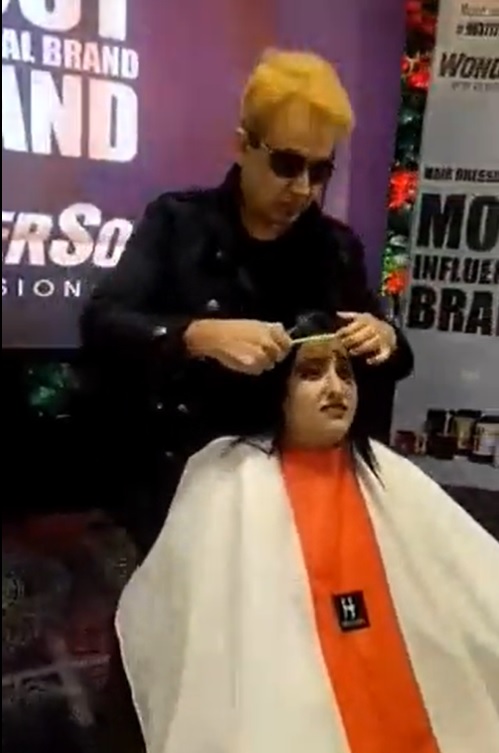 A video grab of the incident.

The police have lodged an FIR against famous hairstylist Jawed Habib for spitting on a woman's hair while styling it, officials said on Friday.

A video of the incident, which took place during a hair-styling workshop held here on January 3, went viral on social media on Thursday.

In the video, Habib is heard telling the audience, "If there is a shortage of water, use saliva". The FIR was lodged at the Mansurpur police station here on a complaint filed by Pooja Gupta, a resident of Baraut town, on whose hair Habib spat during the workshop, the police said.

Habib has been booked under Section 355 (assault or criminal force with intent to dishonour person, otherwise than on grave provocation) of the Indian Penal Code and the Epidemic Diseases Act, 1897, they said.

The celebrity hairstylist apologised for the act on Friday.

"Some people have got offended due to some words during my seminar. I just want to say that our seminars are for professionals working in our field (hair-styling) and such seminars are often lengthy and we are required to make them humorous. But what do I say now, there is only one thing which I say from my heart, if you are really hurt, then I seek your forgiveness. I am sorry,” Habib said in a video.

The National Commission for Women (NCW) had also taken cognizance of the matter on Thursday and asked the Uttar Pradesh Police to probe the veracity of the video which showed Habib spitting on a woman's head while styling her hair.

In a summon to Habib issued on Friday, the NCW said it has taken serious note of his action.

Separately, Hindu activists held a protest against Habib and demanded action against him. PTI