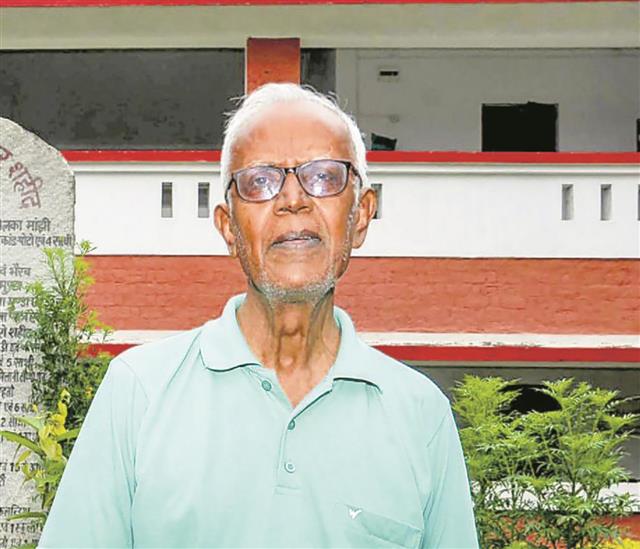 The Bombay High Court on Monday highlighted the issue of undertrials in several cases languishing in prisons waiting for the trial to begin as it appreciated the work done by tribal rights activist Stan Swamy, an accused in the Elgar Parishad-Maoist links case who died in judicial custody waiting for bail on medical grounds.

For how many years can people be asked to languish in jail without a trial? the HC said while hearing posthumously the appeals filed by the late Jesuit priest, whom the HC described as a wonderful person and expressed “great respect” for his work.

The observations were made by a Bench of Justices S S Shinde and N J Jamadar that had also presided over Swamy’s medical bail plea on July 5, when the HC was informed about the 84-year-old priest’s death at the Holy Family Hospital here that day following a cardiac arrest.

“We don’t have time normally, but I saw the funeral service (of Swamy). It was very gracious,” Justice Shinde said. “Such a wonderful person. The kind of service he has rendered to the society. We have great respect for his work. Legally, whatever is there against him is a different matter,” he said.

The Bench also referred to the criticism that the National Investigation Agency (NIA) and the judiciary had received following Swamy’s death.

It expressed regret over how, in several cases, undertrials languished in prisons waiting for the trial to begin.

The Bench, however, also said it had ensured to remain fair while passing orders on Swamy’s medical bail plea, as well as on the pleas filed by his co-accused in the Elgar Parishad-Maoist links case.

“You came to us with his medical bail plea on May 28 and we acceded to every prayer, every time,” the court said to Swamy’s advocate, senior counsel Mihir Desai.

“Outside, we are speechless. Only you (Desai) can clarify this. You have said it on record that you have no grievance with this court in the matter,” the HC said.

The HC further said nobody mentions that this is the court which granted bail to (co-accused) Varavara Rao, despite vehement opposition.

“We allowed (Rao’s) family to meet as we thought human angle has to be seen. In another case (Hany Babu), we sent to hospital of his choice (Breach Candy Hospital-a private medical facility),” the HC said.

“We never anticipated this will happen (Swamy’s death in custody). What was on our minds, we can’t say now as we couldn’t pronounce our order,” the HC said referring to the pending medical bail plea of the late Jesuit priest.

Swamy was arrested by the NIA in connection with the Elgar Parishad-Maoist links case from Ranchi in October 2020. The tribal rights activist, who was suffering from Parkinson’s disease and several other ailments, spent most of his time in custody in the Taloja prison’s hospital in neighbouring Navi Mumbai.

He was admitted to the state-run J J Hospital in Mumbai on two occasions and was shifted to the Holy Family Hospital, a private medical facility, on May 28, following the intervention of the bench led by Justice Shinde.

On July 5, the bench was informed by the hospital authorities that Swamy had suffered from a cardiac arrest two days prior and was put on ventilator support.

He never regained consciousness and was declared dead by the hospital authorities about an hour before Swamy’s medical bail plea was taken up for hearing by the HC, it was informed at that time.

On Monday, following the HC’s observations on it having passed fair orders, Desai said, “Let me say on record that I am extremely happy with various benches of the HC that heard this matter.” Desai, however, urged the HC to let Swamy’s aide and another priest, father Frazer Mascarenhas, to participate in the magisterial inquiry that was initiated under Section 176 of the CrPC following the undertrial’s death.

He also urged the high court to direct the magistrate conducting the inquiry to adhere to the UNHRC guidelines on such inquiries, and to ask for a report of the probe to be submitted in the HC.

Desai was Swamy’s counsel in the appeals challenging a special court order denying him bail on both medical grounds and merits.

Swamy had also filed a plea in the HC just weeks before his death, challenging section 45-D of the stringent Unlawful Activities Prevention Act (UAPA), that barred grant of bail to any person accused under the Act.

Advocate Sandesh Patil, who appeared for the NIA, on Monday said the central agency was objecting to Desai’s request since the HC was hearing appeals challenging a bail order and issues related to the inquiry could not be raised on the same pleas.

“Time and again it is projected that the NIA is responsible for whatever has happened, and that jail authorities are responsible too,” Patil told the HC.

The Bench, however, told him there could be “no control on who says what outside on the matter”.

“You take instructions on how many witnesses, how long will the trial take. We have to look at it practically,” the HC said to the NIA counsel.

“The concern is that for how many years can people be asked to languish in jail without a trial. Not only in this case, but the question will arise on other cases also,” it said.

The HC will continue hearing the pleas on July 23.

The Elgar Parishad case is related to inflammatory speeches made at a conclave held in Pune on December 31, 2017, which, the police claimed, triggered violence the next day near the Koregaon-Bhima war memorial located on the outskirts of the western Maharashtra city.

The police had claimed the conclave was organised by people with alleged Maoist links.

The NIA later took over the probe into the case. PTI