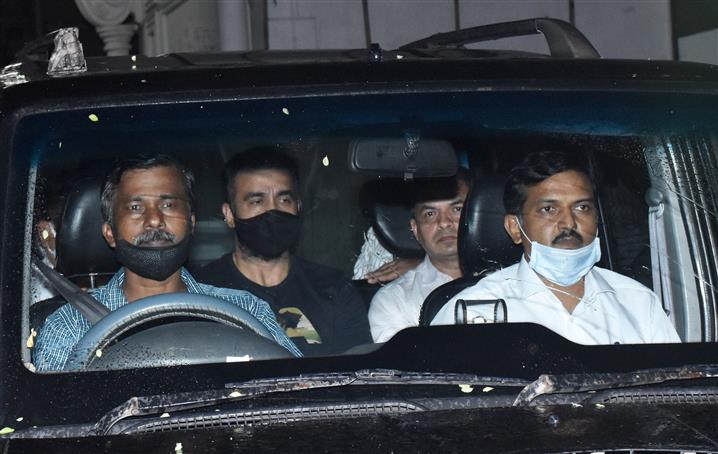 Police Crime Branch personnel during a raid at businessman Raj Kundras house in a pornography-related case, in Mumbai. — PTI

According to an India Today report, officials have found a "concealed locker". The locker contains several documents about businesses and cryptocurrency.

The recovered documents are being examined by the Mumbai Police Crime Branch.

During the raids, the police were focused on searching the "hidden locker". Officials are now investigating the financial aspects of the case after recording actor Shilpa Shetty's statement, the wife of businessman Raj Kundra.

Earlier on Saturday, Shilpa told police that she had no idea about the content of the `Hot Shots' app through which her husband Raj Kundra allegedly distributed pornographic films.

Kundra, a city-based businessman, was arrested by the Mumbai police on July 19 for alleged production of pornographic films and their dissemination through apps.

In her statement given to the police on Friday, Shetty said she did not know about the content of the app, nor did she interfere in her husband's business, police sources said.

She was not linked to the app business in any way, the actor said, as per the sources.

She also told police that she had resigned from the post of director of Kundra's firm, Viaan Industries.

The police seized a laptop from Kundra's house during a search on Friday and also recovered some bank statements, sources said. — With PTI