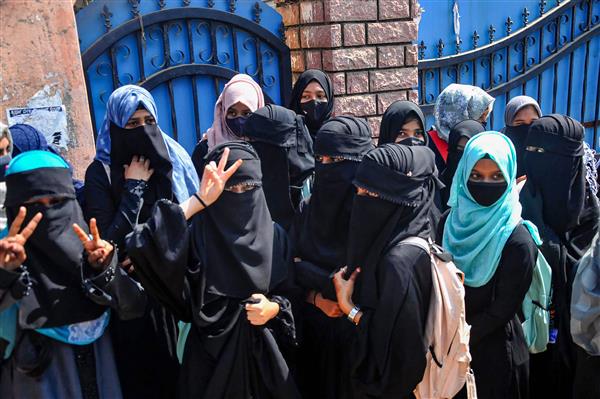 Students stand outside a college as they boycott classes after being denied entry with hijab in the college premises, in Chikmagalur. PTI

The petitioners against ban on hijab in educational institutions in Karnataka on Thursday insisted before the state high court that their right to wear hijab flowed from the Quran and it included both essential and non-essential practices.

During the 10th day of hearing on petitions against ban on hijab in schools/colleges, a Bench led by Chief Justice RR Awasthi asked senior counsel Devadatt Kamat, “How can you insist on wearing hijab in an institution which has a uniform? What is this fundamental right you have?”

Kamat replied, “Before Your Lordships question me on where is my right, I would ask myself, where is the restriction, because 25(2) is very clear on what can be restricted…the right to wear hijab flows from the Quran.”

The Bench indicated that it would like to wind up the hearing on Friday and deliver the verdict quickly.

At the very outset of the proceedings, Karnataka Advocate General Prabhuling Navadgi informed the Bench that an FIR has been registered against members of the Campus Front of India (CFI) who allegedly threatened some teachers in the Government Pre-University Girls College in Udupi district.

He also furnished details relating to the CFI in a sealed cover to the Bench which had on Wednesday sought to know about senior advocate SS Naganand’s submission about CFI members threatening some principals and teachers.

On behalf of one of the petitioners, senior advocate AM Dar said wearing hijab was mandatory in Islam and merely because a Muslim girl wore hijab public order won’t be disturbed.

“This is not a Hindu rashtra or an Islamic republic. It’s a democratic, sovereign, secular, republic where rule of law must prevail,” Dar contended.