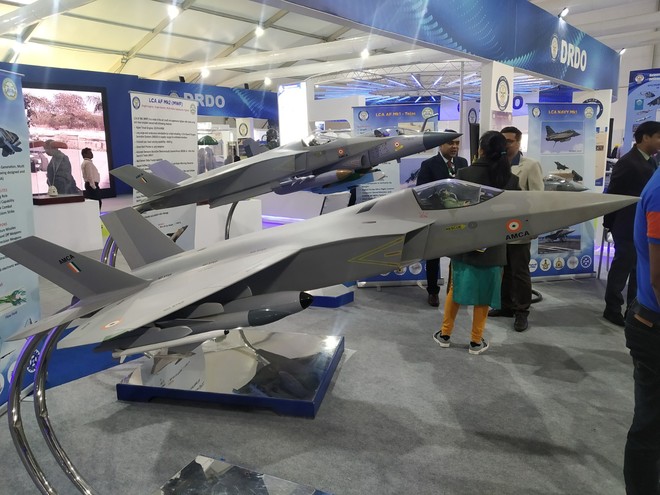 A model of the AMCA on display at DefExpo 2020.

The Indian Air Force (IAF) is considering more numbers of the next generation stealt featured Advanced Medium Combat Aircraft (AMCA). The plan is to have at least 125 planes of the AMCA with two versions powered by separate engines.

During a press conference on Monday, Air Chief Marshal RKS Bhadauria said the force was looking for seven squadrons (some 125 jets) with two separate engines.

Sources said the first two squadrons of the fighters would be powered by an imported engine, the General Electric 414 with 90 KN thrust, same as the one used by US-made fighter jets made by Boeing.

The remaining five squadrons are likely to get an indigenous power plant with a greater thrust of 125 KN. A joint venture is being worked out with a foreign engine maker to jointly develop a new engine. A powerful engine will allow greater weapons carrying capacity and faster speed.

According to the existing plan, the AMCA’s first flight will be in 2027 and full production by 2029. The IAF, Hindustan Aeronautics Limited (HAL), the Aeronautical Development Agency (ADA) and Defence Research and Development Organisation (DRDO) are working on the AMCA.

The DRDO has tasked various labs for doing R&D on material, paint and structure. Separate studies are under way on flight control, avionics, aerodynamics, composite structure and general systems like brakes, hydraulics and fuel systems.

A super-cruise ability, which gives an aircraft capability to fly at supersonic speed, is being developed. The AMCA team is using geometric drawing for stealth by shaping the aircraft and designing it at such angles so as to deflect away maximum radar waves. It will use radar-absorbing material. The AMCA will be a single-seat, twin-engine, stealth all-weather multirole fighter aircraft.