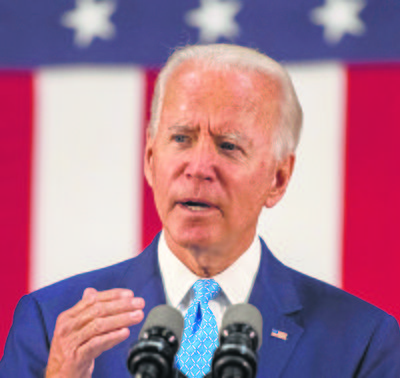 Democratic presumptive presidential nominee Joe Biden, if elected to power in the November elections, will help shape international bodies like the United Nations so that India gets a permanent seat on the Security Council, a former top American diplomat has said.

With Delhi on terror

He (Biden) will work together with India... against cross-border terrorism and stand with it when its neighbours try to change the status quo. —Richard Verma, US ex-Envoy

India has been pushing for reforms in the United Nations, including the Security Council, stating that its composition doesn’t reflect the current realities and is not representative enough.

“There’s no question that under his (Biden) leadership, he would help shape international institutions like the UN to give India a (permanent) seat on the Security Council, he would fulfil its (India) status as a major defence partner,” former US Ambassador to India Richard Verma said on Saturday.

Verma said, “He (Biden) would work together with India to keep our citizens collectively safe. That means standing up against cross-border terrorism and standing with India when its neighbours attempt to change the status quo.” “There’s no question president Biden would build a more inclusive, tolerant just and fair administration that would take US-India relations to new heights,” Verma said.

He urged the Indian-American community to make Biden’s dream of making India and the US the two closest nations in the world a reality. Verma, an Indian-American who was US ambassador to India from 2014 to 2017, joined three other prominent Indian-Americans to make a strong pitch for the small but highly influential community to support and vote for Biden in the US presidential elections.

The 77-year-old former US vice-president is set to be formally nominated by the Democratic Party in August. He will challenge 74-year-old incumbent President Donald Trump, a Republican in the November 3 presidential elections. Verma, Biden Unity Task Force Economic Policy adviser Sonal Shah, former US surgeon general Vivek Murthy and Centre for American Progress Action Fund CEO Neera Tanden in their address to a virtual event claimed that over the past several decades, Biden had a proven track record of being the best friend of Indians and Indian-Americans. — PTI