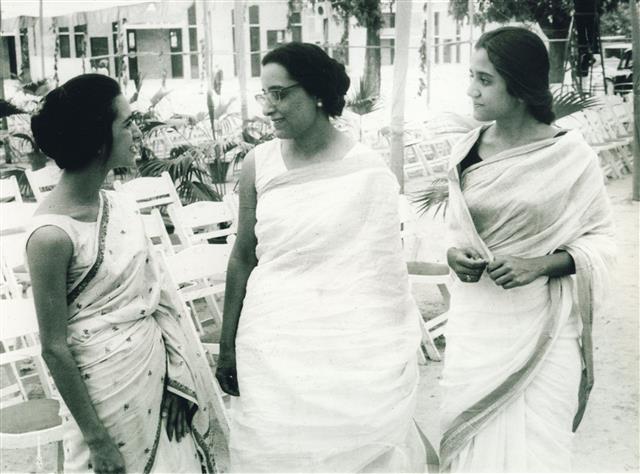 Professor Kamla Chowdhry with Dilnavaz Sidhwa (left) and Harsha Rawal (right), the only two women who graduated with the first batch of the PGP (1964-66). Credit: IIMA Archives

What was not known until today is that the institute also had a founding mother, who, new research now shows, could not become the Director due to “sexism.”

Kamla Chowdhry was IIMA’s first faculty member and a coordinator of programmes at the school between 1962 and 1965.

Her colleagues remember how she was the de-facto director of IIMA as Sarabhai, the Honorary Director, was rarely around for routine matters.

“But sexism played a defining role in Kamla Chowdhry’s professional life almost certainly barring her from becoming the first director of the institute she helped found. Now new archival evidence is showing that she was more central to the IIMA project than has ever been publicly acknowledged,” says Chinmay Tumbe, economics faculty at IIMA, whose extensive work, published on Chowdhry’s birth centenary yesterday resurrects the obscure scholar.

Born in Lahore to a Punjabi Khatri family, Chowdhry studied MA in Philosophy from Punjab University in 1943, later pursuing a doctorate in social psychology at the Michigan University in 1949.

After IIMA was founded in December 1961 as a public-private partnership between the government of India, Gujarat government, local industrialists and the Ford Foundation, Sarabhai helped Chowdhry bag a research position at Harvard Business School (HBS) which was to later become a collaborative institute for IIM A.

Chowdhry went on to practically run the IIMA for years, recruiting faculty, convening faculty meetings and even selecting furniture.

What’s stark is this — in 1962, the year IIMA's administrative office started functioning, its institutional partner Harvard Business School didn’t even admit women into its MBA programme.

And yet Kamla Chowdhry’s wings remained clipped beyond a point.

“In spite of the full backing of Sarabhai and Prakash Tandon, chairman of IIMA’s board of governors at the time, Dr. Kamla Chowdhry never became full-time Director of IIMA. As de facto director and senior-most faculty, she was the top contender for the post. But a peculiar circumstance put paid to that prospect,” Tumbe says.

His researcher reveals how over 1963 and 1964, a doctoral student from HBS, deputed to IIMA, wrote a series of letters against Kamla to Harry Hansen, then director of the IIMA project in Boston, saying, “Only if it becomes absolutely necessary should we talk about blocking Dr. Chowdhry, but whatever we do, we must see to it that she does not become Director, or for that matter Deputy-Director, or any other high administrative position.”

Tumbe says it is very likely that this correspondence added to the misgivings HBS faculty may have had about Kamla Chowdhry’s leadership abilities.

“Chowdhry was widely (and accurately) seen to be close to Sarabhai, and all communication to him tended to be routed through her. But Sarabhai himself was rarely around, and his absence, in effect, gave Chowdhry powers that were often misconstrued. HBS effectively vetoed Chowdhry out of contention,” reveals the author.