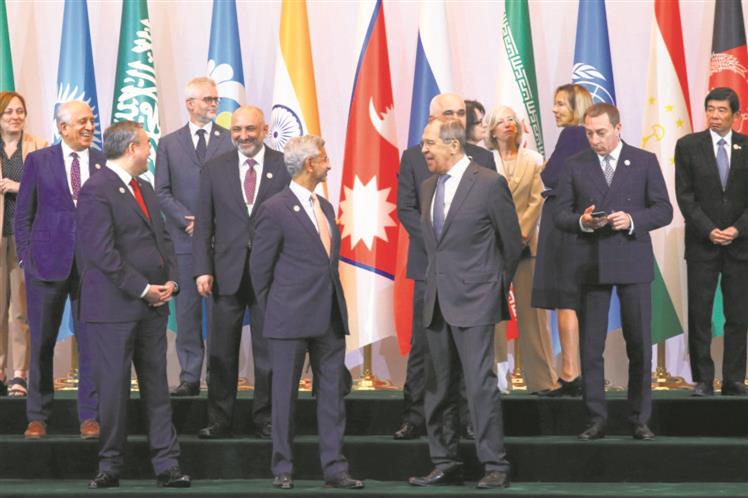 The connectivity conference in Tashkent, attended by almost all foreign ministers from Central and South Asia, saw sparks fly between Pakistan and Afghanistan before both sides cooled the tensions with a meeting between their leaders Imran Khan and Ashraf Ghani.

External Affairs Minister Subrahmanyam Jaishankar and Imran Khan also crossed swords, though indirectly. In an indirect reference to the Pakistan army’s obdurate stance on trade and connectivity with India, Jaishankar said the real issue was of mindsets, not of disputes. Imran in his speech cited the Kashmir issue as a major hindrance to connectivity projects.

Jaishankar takes a dig at Pak over trade

With the Pakistan PM on stage, Afghan President Ghani criticised Pakistan indirectly for not stopping terrorists from crossing over into Afghanistan and for failing to convince the Taliban to move for meaningful talks.

Imran, in turn, pointed out that the Taliban were not ready for a deal when there were 1.5 lakh NATO troops in Afghanistan. “Why would they compromise now? Why would they listen to us when they are feeling victorious?’’ he posed while stating that over 70,000 Pakistanis have also been victims of terrorism.

Although the Tashkent meet was primarily meant for foreign ministers, top leaders of both Pakistan and Afghanistan had landed there since the gathering was expected to carry on the discussions they had held over the previous two days in Dushanbe.

The immediate casualty of the clash between Imran and Ghani was the proposed weekend peace conference in Pakistan that was to be attended by elements close to the Kabul regime. The Taliban had recused itself as it had held discussions several times with the Pakistanis.

Better sense prevailed after the ministers had delivered their speeches. Imran and Ghani held a meeting at which Inter-Services Intelligence Director General Lt Gen Faiz Hameed was also present.

Speaking at the meeting, Jaishankar wanted the Chabahar Port to be included in the North-South Corridor, which was the main topic of discussions. He also said for reliable connectivity within and through Afghanistan, world must have confidence in its governance.

Describing connectivity efforts as an act of trust, he felt they must conform to international law, respect nations’ sovereignty and be based on economic viability.

The inclusion of Chabahar Port in the INSTC (International North-South Transport Corridor) framework would ensure a secure and unhindered access to sea for Central Asian countries, he said while welcoming the India-Iran-Afghanistan-Uzbekistan Working Group on the joint use of Chabahar port.