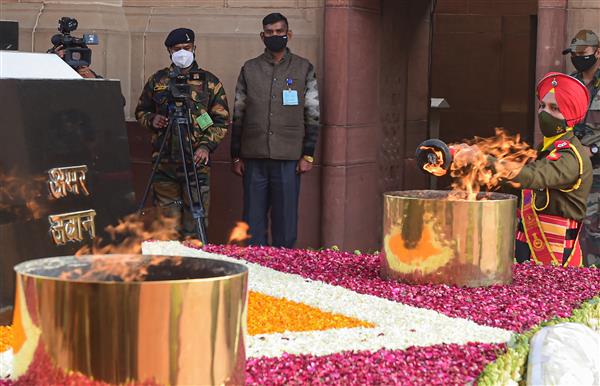 A torch being lit from Amar Jawan Jyoti flame to be taken to National War Memorial for merging it with the flame at the memorial. - File photo

Amid a raging debate on the merits of merging Amar Jawan Jyoti flame with that of the National War Memorial, historical sources reveal the flame at India Gate was conceived as temporary, and the construction of a permanent memorial for India’s war heroes was always in the pipeline.

A dig into Parliament archives throws light on the vexed issue with opinions divided on whether the merger of the two flames this week was, at all, necessary.

It turns out that late Prime Minister Indira Gandhi-led Congress government was, as long ago as 1972, contemplating building a permanent war memorial called Amar Jawan at Delhi.

Giving a written answer (The Tribune has accessed the copy from Parliament archives) to a question on “Erection of Victory Memorial” in Lok Sabha on September 1, 1972, then Defence Minister Jagjivan Ram referred to the temporary nature of the war memorial and Amar Jawan Jyoti at India Gate and spoke of the government’s future plans.

“A temporary War Memorial with an Amar Jawan Jyoti has already been constructed under the arch of the India Gate in Delhi. A proposal to construct a permanent war memorial (Amar Jawan) at Delhi to commemorate all our war dead since Independence is under active consideration of the government. Whether the names of the war dead, including those of the December 1971 war with Pakistan, will be inscribed individually or whether their memory will be collectively commemorated by inscribing the names of Regiments and units, which took part in the various military operations and conflicts since Independence, is a matter on which the decision will be taken at an appropriate time,” Ram had told the Lok Sabha.

The answer was given in reply to a question by Congress’ Junagadh MP Vekaria Nanjibhai Ravjibhai, who had asked, “Whether the government proposes to erect a victory memorial where names of the personnel of Armed Forces who died in the December 1971 war with Pakistan will be inscribed; if so the location thereof; if not reasons there for.”

More forces for Punjab ahead of Blue Star anniversary