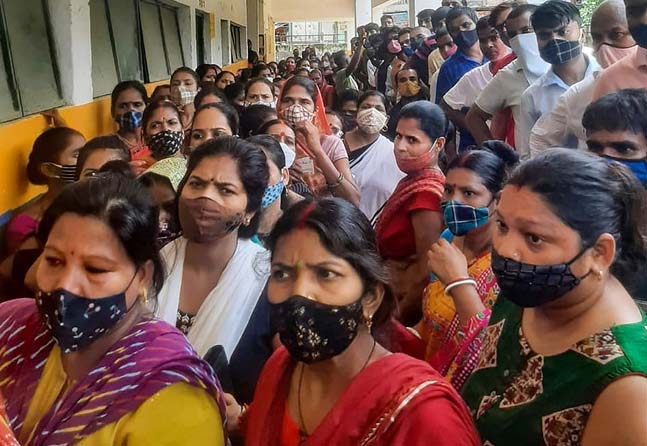 Rush at a vax centre in Noida. PTI

In what has set alarm bells ringing, the Covid R-value, a critical marker of the disease denoting virus reproduction number, has touched 1.2 in India, up from 0.66 in June-end and 0.88 around mid-July.

The number has crossed 1 in eight states, with Himachal Pradesh and Jammu and Kashmir reporting the highest 1.4 each amid increasing infection trends. Lakshadweep has a value of 1.3; Tamil Nadu, Mizoram and Karnataka 1.2 each and Puducherry and Kerala 1.1 each. The R-value represents the average number of new infections generated by one Covid patient during his entire period of infection. 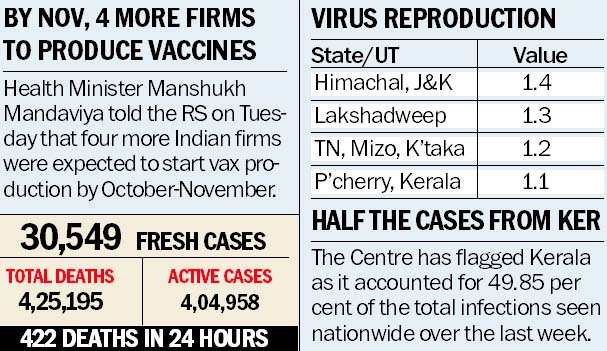 “The national value has risen to 1.2 from 0.66 recently. It is rising in eight states,” Health Ministry spokesperson Lav Agarwal said, noting the second wave was not over yet. The states having a stable reproduction value of 1 are Haryana, Nagaland, Meghalaya, Goa, Jharkhand, Delhi and Bengal. The government has flagged Kerala, North-East, Himachal and J&K as areas of concern with Kerala leading the infection even as 30,459 daily cases were recorded today, in a major reduction since the last five days that witnessed over 40,000 cases each.

“The cases are now being reported from limited areas with 49.85 per cent of the infections seen last week coming from Kerala. As of today, 47.5% of India’s cases are from 18 districts—Kerala 10, Maharashtra 3, Manipur 2; Arunachal Pradesh, Meghalaya and Mizoram one each. The active cases that were below 4 lakh until July 28 have now crossed the 4 lakh mark,” said VK Paul, Member, Health, NITI Aayog. Kerala and Maharashtra together make for 60% of India’s active cases.

The ministry today said the central team that returned from Kerala found case positivity rate at a high of 17.26 per cent with 91% active cases in home isolation in Mallappuram.

While India’s overall weekly case positivity rate fell below 2% after three months today, 44 districts, including one in Himachal, continued to show 10 per cent plus positivity rate.