In many respects, modern-day India is counted as a success story, says Barack Obama 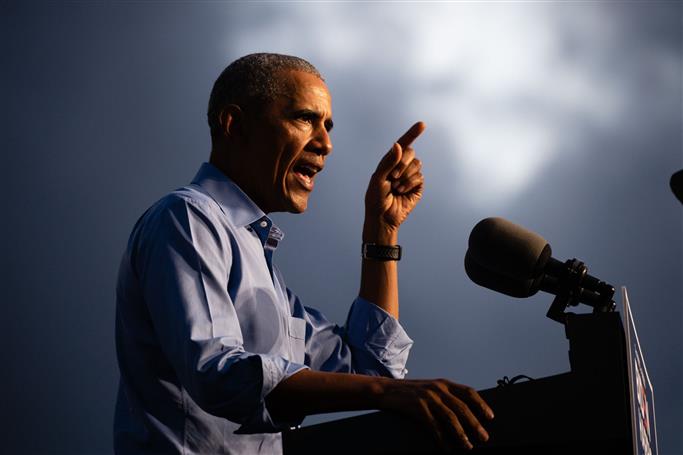 Former US President Barack Obama has said that modern-day India can be counted as a success story in many respects, despite bitter feuds within political parties, various armed separatist movements, and corruption scandals.

The 44th US president, in his latest book, says the transition to a more market-based economy in the 1990s unleashed the extraordinary entrepreneurial talents of Indians, leading to soaring growth rates, a thriving technology sector, and a steadily expanding middle class.

In his book "A Promised Land", Obama writes on his journey from the 2008 election campaign to the end of his first term with the daring Abbottabad (Pakistan) raid that killed al-Qaeda chief Osama bin Laden.

"A Promised Land" is the first of two planned volumes. The first part hit bookstores globally on Tuesday.

“In many respects, modern-day India is counted as a success story, having survived repeated changeovers in government, bitter feuds within political parties, various armed separatist movements, and all manner of corruption scandals,” Obama writes.

As the chief architect of India's economic transformation, (former) Prime Minister Manmohan Singh seemed like a fitting emblem of this progress: a member of the tiny, often persecuted Sikh religious minority who had risen to the highest office in the land, and a self-effacing technocrat who had won people's trust not by appealing to their passions but by bringing about higher living standards and maintaining a well-earned reputation for not being corrupt, says Obama, who had visited India twice as president in 2010 and 2015.

Referring to his November 2010 India visit, Obama says he and Manmohan Singh had developed a warm and productive relationship.   “While he could be cautious in foreign policy, unwilling to get out too far ahead of an Indian bureaucracy that was historically suspicious of US intentions, our time together confirmed my initial impression of him as a man of uncommon wisdom and decency; and during my visit to the capital city of New Delhi, we reached agreements to strengthen US cooperation on counterterrorism, global health, nuclear security, and trade,” Obama writes.

“What I couldn't tell was whether Singh's rise to power represented the future of India's democracy or merely an aberration,” he said.

Obama writes that Singh at the time was worried about India's economy, cross border terrorism and the rise of anti-Muslim sentiments.

During a conversation without aides and note-takers, Singh told him: "In uncertain times, Mr President, the call of religious and ethnic solidarity can be intoxicating. And it's not so hard for politicians to exploit that, in India or anywhere else." “I nodded, recalling the conversation I'd had with Václav Havel (Former President of Czechoslovakia) during my visit to Prague and his warning about the rising tide of illiberalism in Europe. If globalisation and a historic economic crisis were fueling these trends in relatively wealthy nations—if I was seeing it even in the United States with the Tea Party —how could India be immune?” he said.

Across the country, millions continued to live in squalor, trapped in sunbaked villages or labyrinthine slums, even as the titans of Indian industry enjoyed lifestyles that the rajas and moguls of old would have envied, Obama writes.

“Expressing hostility toward Pakistan was still the quickest route to national unity, with many Indians taking great pride in the knowledge that their country had developed a nuclear weapons program to match Pakistan's, untroubled by the fact that a single miscalculation by either side could risk regional annihilation,” he says.

He hadn't originally become prime minister as a result of his own popularity.

“In fact, he owed his position to Sonia Gandhi — the Italian-born widow of former prime minister Rajiv Gandhi and the head of the Congress Party, who'd declined to take the job herself after leading her party coalition to victory and had instead anointed Singh. More than one political observer believed that she'd chosen Singh precisely because as an elderly Sikh with no national political base, he posed no threat to her forty-year-old son, Rahul, whom she was grooming to take over the Congress Party,” he said.

In his book, Obama, referring to his meeting with Sonia and Rahul Gandhi at the dinner table, said that the Congress president listened more than she spoke, careful to defer to Singh when policy matters came up and often steered the conversation toward her son.

“It became clear to me, though, that her power was attributable to a shrewd and forceful intelligence. As for Rahul, he seemed smart and earnest, his good looks resembling his mother's. He offered up his thoughts on the future of progressive politics, occasionally pausing to probe me on the details of my 2008 campaign,” he wrote.

“But there was a nervous, unformed quality about him as if he were a student who'd done the coursework and was eager to impress the teacher but deep down lacked either the aptitude or the passion to master the subject,” Obama said. PTI