UP polls: In Purvanchal, bahubalis still rule the roost : The Tribune India

UP polls: In Purvanchal, bahubalis still rule the roost 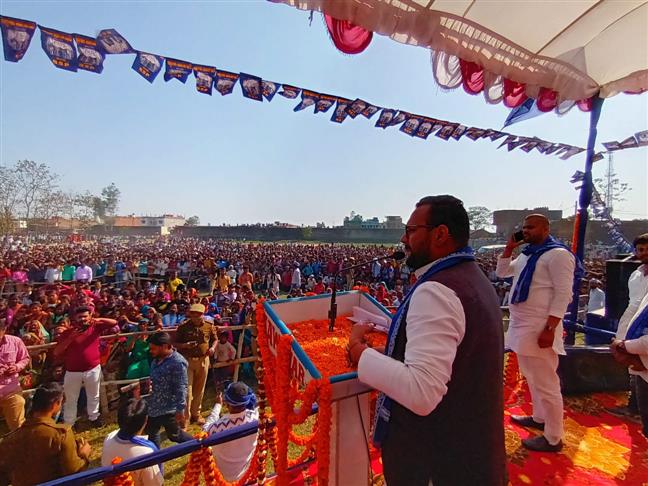 Sonauli in the Maharajganj district, which votes on March 3 in Phase 6, is the last township on the Indo-Nepal border.

It falls under the Nautanwa Assembly constituency in the Maharajganj district. Tourists from India can enter Nepal with vehicles bearing Indian number plates, as can cargo trucks carrying essential items.  The popular transit point, incidentally, is known for both legal as well as illegal crossings and trade.  One can cross the border on foot, have a cup of tea in Nepal and return to India in 15 minutes.

Lakshmi, who sells tea on the Nepalese side, charges Rs 25 INR and Rs 40 in the Nepalese currency for two cups. She has heard about "Yogiji and Modiji" and the Assembly elections happening just a few meters on the other side.

For shopkeepers on the Indian side, the business mostly comes from residents of nearby townships of Nepal, for instance, Siddharthanagar, (also called Bhairahawa) in the Lumbini Province.

Businesses in Sonauli are owned by people from all communities, including Muslims and Sikhs. Running a garment shop here, a Sikh trader says rising fuel prices, tax structures, and Covid have affected his sales like never before.

"Earlier, I used to earn much more. At times now I just make about Rs 40 per piece. Even though transport costs of goods from Surat have increased, the spending capacity of people has decreased," he says.

As for these elections, he would rather discuss the prospects of the Aam Aadmi Party in Punjab than comment on Uttar Pradesh polls. His brother, who runs the auto-spares shop next door, is more forthcoming.

There's another reason why voters prefer to play it safe in the hinterlands of Purvanchal, where the will of mafia dons or "babubalis" still prevails in many parts. In the past, activities like “smuggling/illegal trade” or even plain survival in places like Nautanwa required the “sanrakshan” (protection) of strongmen of the region. Some of these so-called protectors even had a “Robin Hood” image—that of a heroic outlaw who stole from the rich to help the poor.

Their influence may have waned over time but hasn't disappeared entirely, and so ordinary voters prefer to play their cards close to their chest if a "bahubali neta" is in the fray.

Despite the discourse on the need to end criminalisation in politics, most mafia dons and bahubalis contesting the ongoing polls in Purvanchal appear to be doing well. The directions of the Supreme Court have also had no effect on the political parties in the selection of candidates, says the UP Election Watch and Association for Democratic.

Take the case of Aman Mani Tripathi, the sitting MLA from Nautanwa.

Having contested the 2017 election as an Independent candidate and beaten his rival Samajwadi Party candidate despite being in prison at that time in connection with a murder case—that of his wife Sara—he’s fighting this year’s assembly elections as a candidate of the Bahujan Samaj Party, which he joined just before assembly elections earlier this month.

He’s currently out on bail, and the grapevine has it that he was trying to contest the elections as a Nishad Party candidate but that ally Bharatiya Janata Party intervened.

His wife Sara’s mother Seema Singh, and Nidhi Shukla, the sister of poetess Madhumita Shukla for whose murder Aman Mani Tripathi’s father Amarmani Tripathi was convicted, also vainly staged a dharna outside the BSP office in Lucknow seeking the cancellation of his candidature.

Tripathi’s father Amarmani Tripathi, a four-time MLA from Nautanwa, and his wife are both serving life sentences in the murder case.

Candidates with ‘tainted’ past

Statistics show that the number of candidates with tainted past rose in Phase 6 of the ongoing elections and those of women candidates fell as elections move to Phase 6 in Purvanchal.

In fact, some 65 per cent of Assembly seats in this phase have been declared sensitive due to the presence of candidates with criminal backgrounds.

As many as 37(65 per cent) out of 57 are designated "Red alert constituencies," meaning where three or more contesting candidates have declared criminal cases against them.