In pictures: Another election day in Prayagraj’s ‘village of twins’ : The Tribune India

In pictures: Another election day in Prayagraj’s ‘village of twins’

People say there are about 30 twins in Mohammadpur Umri, where around 1,000 people live 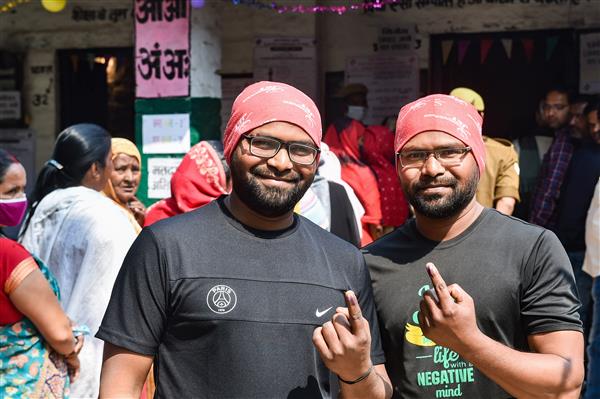 30-year-old twins Vipin Kumar and Amit Kumar show their fingers marked with indelible ink after casting vote, during the fifth phase of UP Assembly polls, in Prayagraj district, on Sunday, February 27, 2022. PTI

Amit and Vipin might have raised some eyebrows when they cast their vote at a booth in Mohammadpur Umri village here on Sunday. They have an uncanny resemblance to each other.

Amit and Vipin are twins and Prayagraj’s Mohammadpur Umri is called a “village of twins”.

A day before the polling, PTI met came across at least 10 twins, and local people say there are about 30 such pairs in the village, where around 1,000 people live.

Villagers say, over the years, several experts have visited the village, taking blood and saliva samples, to understand the phenomenon. Outsiders sometimes call the place a “haunted village”.

Amit says he was pulled up by security personnel in the last elections when he went to a polling booth to vote.

The security personnel took him for his brother Vipin, saying he has already voted, says Amit.

Amit says luckily his brother and mother were around, who explained to the BSF personnel that they are twins.

Another resident admits having voted twice on numerous occasions even though he was challenged once by the media. He says they manage to erase “indelible ink”.

Mohammad Hassan wasn’t as lucky as his brother Mohammad Rehan this time.

Hassan couldn’t vote as his name was missing in the voters’ list.

Rehan says several scientists in the past visited the village, taking their saliva and blood samples to understand why so many twins took birth here.

But till now it is a mystery, he says.

Local residents rubbish the claims that their village is a “haunted one”.

“The only thing we can say is that it is a blessing from Allah,” Ashar and Irma’s mother says.