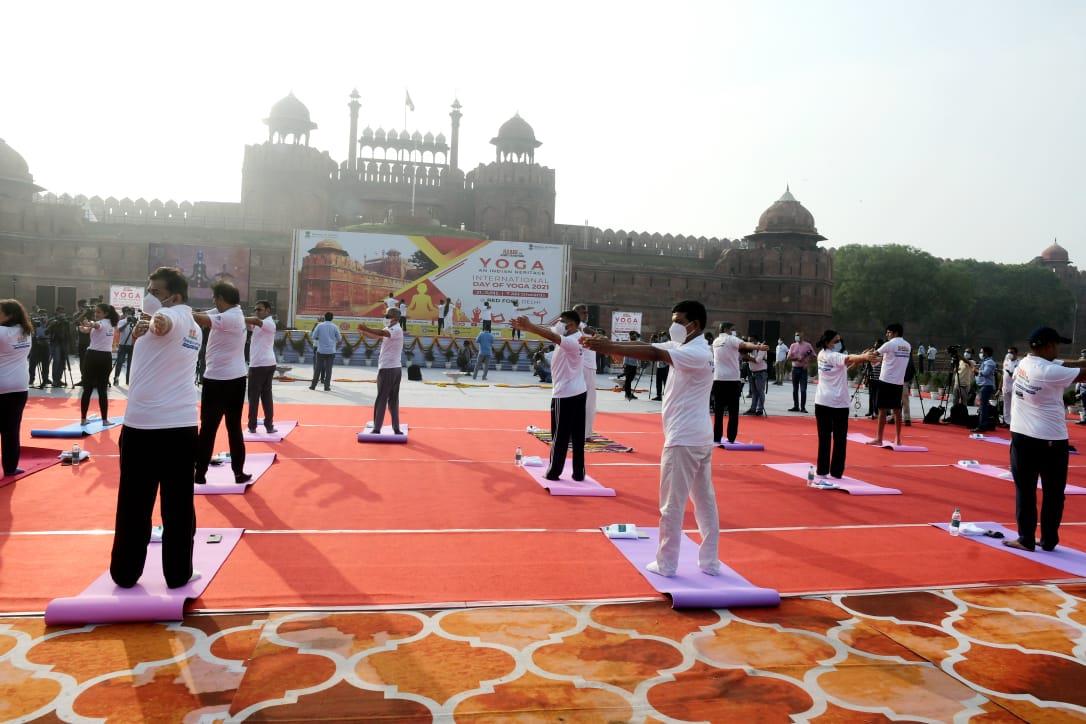 However, the nation witnessed muted celebrations, and events were held virtually due to the COVID-19 pandemic.

Taking on Twitter, the President termed Yoga as ‘India’s great gifts to the world’.

“International Day Of Yoga greetings! Our ancient seers’ vision of bringing mind-body together to achieve holistic health and happiness has benefited millions over millennia. One of India’s great gifts to the world, it can be especially helpful during Covid-19,” President Kovind tweeted with the has tag ‘BeWithYogaBeAtHome’.

Vice President M Venkaiah Naidu performs Yoga at his official residence in Delhi with his wife Usha to mark the occasion.

“This year’s theme ‘Yoga for well-being’ reflects the need to practice Yoga regularly for our holistic wellness as yoga improves both our physical and mental health,” tweeted the Vice President.

#InternationalDayOfYoga greetings! Our ancient seers’ vision of bringing mind-body together to achieve holistic health and happiness has benefited millions over millennia. One of India’s great gifts to the world, it can be especially helpful during Covid-19. #BeWithYogaBeAtHome pic.twitter.com/pO91fOnBxE

Prime Minister Narendra Modi, while addressing the nation on the occasion, announced the launch of the M-Yoga app for yoga training videos that will be available worldwide in different languages and said that the application will play a ‘great role’ in expanding yoga across the globe.

“Relevance of Yoga has increased during the COVID-19. Yoga has helped us to maintain our physical and mental health. We should make Yoga or other physical activities a part of our daily life. These will help us to increase our immunity against coronavirus,” Dr Harsh Vardhan said.

Union Defence Minister also greeted the world on the occasion of International Yoga Day and urged people to integrate Yoga in daily lives.

“Greetings to everyone on #YogaDay . Yoga is an ancient Indian practice that has now become extremely popular worldwide. Yoga helps a person in achieving greater mental and physical well-being. Integrate Yoga in your daily life for all-around health and wellbeing. #YogaForWellness,” he tweeted.

MoS Finance and Corporate Affairs, Anurag Thakur also took part in the celebrations and performed Yoga at his residence in Delhi.

This year, the theme of the occasion is ‘Yoga For Wellness’, and will focus on practising Yoga for physical and mental well-being.

Since 2014, the occasion has been observed in mass gatherings in different parts of the country.

The observation of IDY is a global activity and the preparatory activities normally start 3-4 months before June 21. Millions of people are introduced to Yoga in the spirit of a mass movement as part of IDY observation every year.

Yoga celebrations were held virtually last year as well due to the COVID-19 pandemic. (ANI)