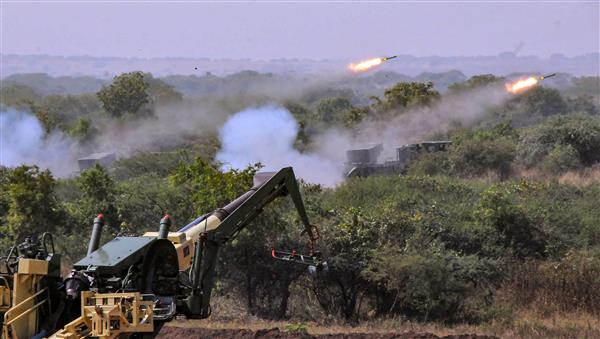 India has deployed upgraded L70 anti-aircraft guns in the high mountains along the Line of Actual Control (LAC) in Arunachal Pradesh sector in addition to its existing M-777 howitzers and the Swedish Bofors guns, officials said on Wednesday.

The deployment, which came months after induction of M-777 ultralight howitzers, is aimed at boosting the Indian Army’s overall fire power in the face of China’s aggressive posturing following the eastern Ladakh standoff, they said.

The upgraded L-70 guns were positioned around two months ago as part of a series of measures taken to bolster the Indian Army’s operational preparedness to deal with any eventualities, the officials said.

India has a sizable number of Bofors howitzers in the eastern sector which have been the backbone of its fire power capability in the region.

Military officials said the upgraded L70 guns were deployed in several key locations in Arunachal Pradesh in addition to other sensitive positions along the entire LAC and that their inductions have significantly enhanced the Army’s air defence mechanism.

“The gun is also equipped with a Muzzle Velocity Radar for enhancing the accuracy of fire. The gun has the ability to be integrated with tactical and fire control radars which give it more flexibility in its deployment,” she said.

Capt Abbasi said the legacy gun has now been transformed into a sophisticated air defence gun.

Another official said the upgraded gun system that operates along with a high-end Israeli radar can be counted among the best available air defence guns in its class globally.

In the last few months, the Army has deployed a good number of easily transportable M-777 ultra light howitzer guns which are at times moved from one place to another in Chinook helicopters depending on operational requirement.

The M-777 artillery guns, having a maximum range of 30 km and manufactured by the BAE Systems, were first received by the Army in 2018. The procurement had come after a 30-year wait for new artillery guns since the Bofors scandal.

The L70 guns were originally manufactured by Swedish defence firm Bofors AB in 1950s and India has started inducting over 1,000 of them in the 1960s.

The guns have been upgraded by state-run Bharat Electronics Limited (BEL).

Following the escalation in tension in eastern Ladakh standoff, the Army has taken a series of measures to boost its operational capabilities in the eastern sector bordering China that included procurement of all terrain vehicles, precision guided ammunition, high-tech surveillance equipment, radars and weapons.

Officials said enhancing combat capability is a continuous process and it will go in sync with operational requirements and overall security situation.

They said an equal amount of focus has been given to enhancing operational capability in the Northern as well as eastern sector.

Eastern Army Commander Lt Gen Manoj Pande on Tuesday said that China has increased the intensity of military exercises and deployment of troops in its depth areas opposite the Arunachal Pradesh sector and that India has correspondingly readied contingency plans to deal with any eventualities.

The commander asserted that the Indian preparedness to respond to any contingency is of a “very high order”.

As a result of a series of military and diplomatic talks, the two sides completed the disengagement process in the Gogra area in August and in the north and south banks of the Pangong lake in February.

The last round of military talks on October 10 ended in a stalemate following which both sides blamed each other for the impasse.

In a strong statement after the 13th round of talks, the Indian Army said the “constructive suggestions” made by it at the negotiations were neither agreeable to the Chinese side nor could Beijing provide any “forward-looking” proposals.

Each side currently has around 50,000 to 60,000 troops along the Line of Actual Control (LAC) in the sensitive sector. PTI