India, China agree to disengage in Ladakh; will work out modalities

Back to June 6 status | Immediate movement unlikely as mistrust persists 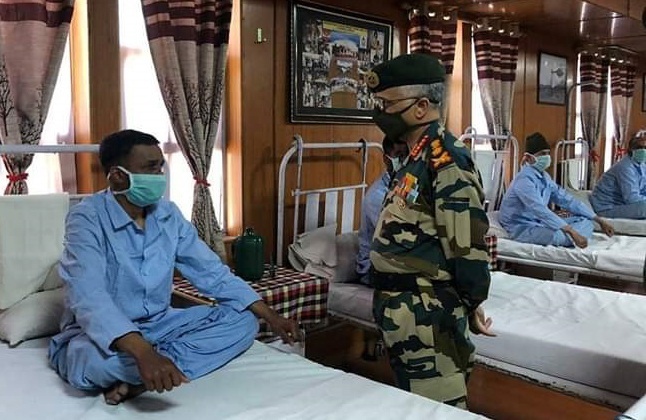 Army Chief Gen MM Naravane interacts with jawans, injured in Galwan clash, at a military hospital in Leh on Tuesday. A Tribune photograph

A week after the deadly clash in the Ladakh’s Galwan valley, the militaries of India and China are back to the June 6 status. They will now work out the modalities on the ground to disengage troops and withdraw their heavy military equipment, including fighter jets and tanks, lined up near the Line of Actual Control (LAC).

Army Chief Gen MM Naravane on Tuesday reviewed military preparedness in eastern Ladakh as he began a two-day visit to the region. Gen Naravane visited an Army hospital where 18 soldiers injured in the clash in Galwan Valley on June 15 are undergoing treatment, Army officials said. He complimented them for their bravery, they added. The Army Chief is learnt to have directed the commanders to keep a high-level of alertness.

Delhi for May 4 status quo

India has sought restoration of status quo ante as on May 4, a day before the first clash occurred on the north bank of Pangong Tso. This will include opening up of patrolling routes along the disputed LAC sections.

Top sources in New Delhi confirmed that no movement was expected immediately as there was an element of mistrust after the Galwan valley clash that left 20 dead on the Indian side and an unspecified number of casualties on the Chinese side.

“The talks were conducted in a cordial, positive and constructive atmosphere. There was a mutual consensus to disengage,” an authoritative source said on Tuesday.

The Working Mechanism for Consultation and Coordination on India-China Border Affairs will conduct a virtual meeting on Wednesday. The panel was set up in 2012 and is tasked with addressing issues that may arise in border areas.

“The modalities for disengagement from all friction areas in eastern Ladakh were discussed and will be taken forward by both sides,” the source added.

In Beijing, Chinese Foreign Ministry spokesperson Zhao Lijian said: “The meeting (between Commanders at Ladakh yesterday) showed that the two sides wish to control and alleviate the situation through dialogue... and have agreed to take measures to cool down the situation.”