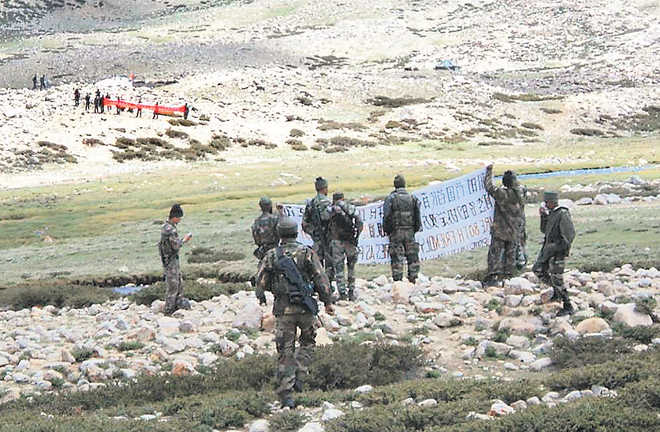 Fully-armed troops of Indian and Chinese armies are at present locked in a tense stand-off in Eastern Ladakh, indicating that the clash on the night intervening May 5 and 6 between the two sides is still simmering.

Troops of the People's Liberation Army (PLA) of China are holding ground at a position on the north-bank of Pangong Tso Lake. Some 80-100 troops form what is the “front” for the stand-off of each country.

This is just a few hundred metres away from the spot where troops of both sides clashed in the small hours of May 6, and even pelted each other with stones resulting in injuries to several people on either side.

Some 1,200 troops are in a back-up location of China. India has reinforced its position militarily, sources said, asking for the exact numbers to be avoided.

The Indian troops are at a location India perceives as its own territory along the disputed Line of Actual Control (LAC). The Chinese dispute Indian claims at this particular location and their troops are stationed just across. The Chinese do not have a post at this location. They normally come for patrol and return.

Sources said the matter had been ‘bubbling’ since February when the PLA stopped an Indian patrol at a location called “Finger 2” on the north bank of Pangong Tso, a 135-km glacial melt lake which straddles India and China, at an altitude of 13,000 feet.

“Finger 2’ is not disputed, and is held by India. A fully-paved Indian road exists in the place. The movement of the Chinese in this area was a red-herring for the Northern Command.

India retaliated and stopped Chinese patrol at locations much ahead, or eastwards, of “Finger 2’. Since the perception of LAC varies the patrolling parties of either country stop the other one and ask to return. There is a laid-down protocol on such interactions and both parties are expected to return.

During the stand-off, the Indian Air Force was asked to fly in a pair of Sukhoi30 MKI after helicopters of China were seen flying on their side. As per existing arrangements, fighter jets maintain a certain distance from the LAC.