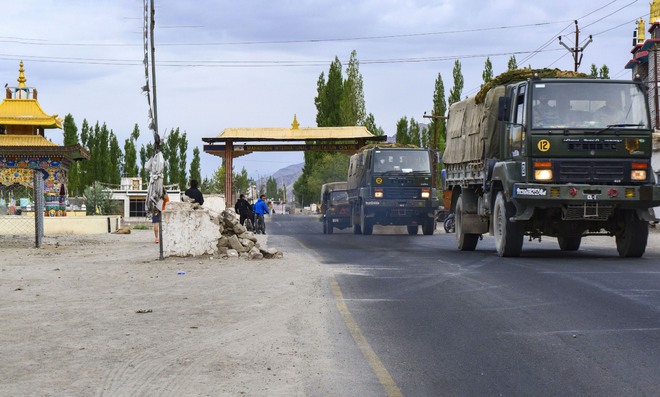 An army convoy moves towards LAC amid border tension. FILE

Major General-level officers of India and China met on Saturday to reduce tensions at the Depsang plains along the Line of Actual Control (LAC) in Ladakh.

Under the wider ambit of reducing troop mobilisation and war-waging equipment on both sides of the 900 sq km Depsang plains, the talks revolved around two issues — restoring patrol rights in ‘grey zone’ areas, where the perception of the LAC varies, and arriving at some semblance of understanding as to what are each other’s perceptions of the LAC and how these are to be ‘respected’ by troops on the ground.

Depsang is a flat plateau at an altitude of 16,000 feet through which passes the Darbuk-Shayok-DBO (DSDBO) road that links up to the DBO landing ground and further northwards to the Karakoram pass. Any bid to cut off the DBO could restrict access to the Karakoram pass and even attempt to seize the 20,000 feet high Sasser La, west of Depsang. It further opens a route to Sasoma and crucially the road to Siachen.

All such attempts by the PLA can be thwarted for now, explained an official. Depsang has seen two major standoffs in 2013 and 2014 besides dozens of face-offs annually.