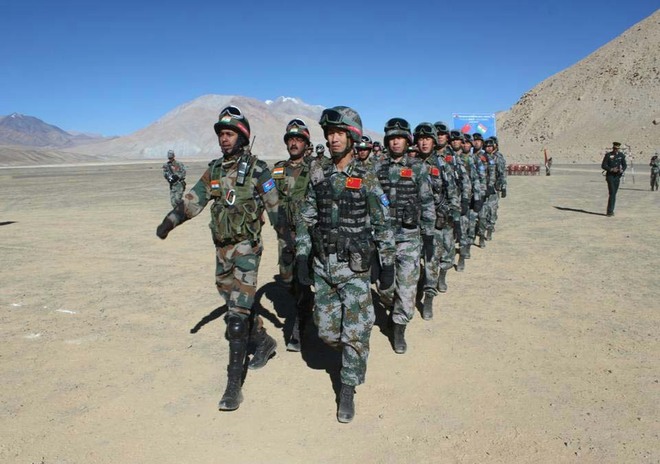 Armed forces of India and China have literally “dug in” their boots at separate locations along the Line of Actual Control (LAC) in Eastern Ladakh. The Chinese have a huge build up that includes upcoming military-style bunkers, new upcoming permanent structures, military trucks, road-building equipment and even a warehouse.

Some of the structures, military camps, road-building equipment and trucks are within the territory of India and in areas that are not disputed, like those at the confluence of the Galwan and Shyok rivers in what is defined as the sub-sector north (SSN).

“Matters could escalate. This is by far the most tense situation since 1962,” said an official. An Australia-based security analyst tweeted what he claimed were satellite images of Chinese “incursion” in Galwan.

At Galwan, India and China never disputed the alignment of the LAC. India’s new road, the 255-km Darbuk-Shyok-Daulat Baig Oldie (DSDBO) road has seemingly caused this flare up. The road is within the Indian territory and provides all weather access to the DBO, Depsang plains and the Karakoram pass. Opposite of the road or eastwards of it is the Aksai Chin plateau, illegally occupied by China.

In the valley along the Galwan river, the China infrastructure is poor. The other flashpoint is the north bank of Pangong Tso, a 135-km glacial melt lake at an altitude of more than 14,000 feet. China is objecting to a road made by India between one of the eight mountain spurs that end at the lake. Each of the spur is identified as “finger” in the military parlance and each ridgeline is separated by 2-5 km. On the night intervening May 5 and 6, troops of either side had clashed, resulting in injuries to many.

India assumes the LAC to be at Finger 4. China is trying to push Indian troops back to Finger 2, a distance of more than 10 km.

'Injury on neck and trauma resulting due to it caused death'