To also focus on trade & counter-terrorism 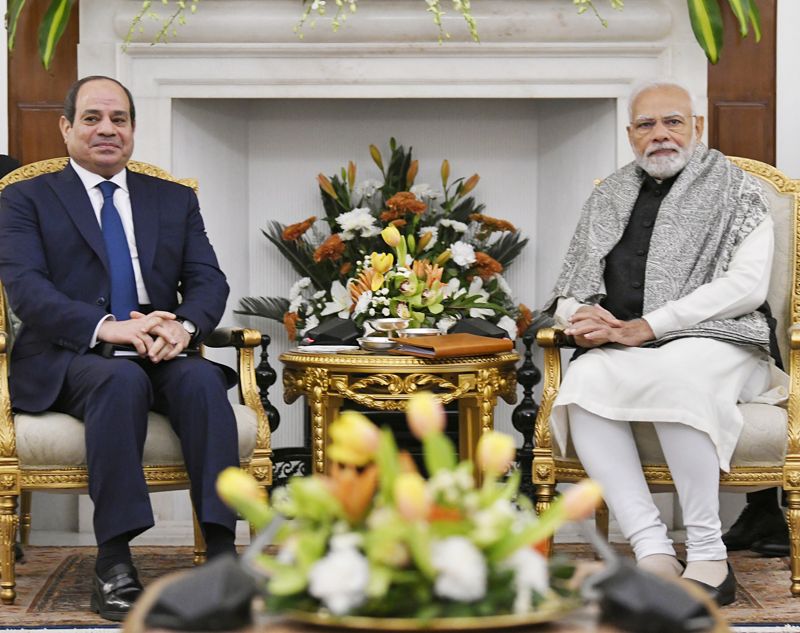 India and Egypt have decided to upgrade their ties to a strategic partnership under which they will step up political, defence, economic and scientific cooperation after looking at long-term data, announced Prime Minister Narendra Modi after talks with the visiting President of Egypt, Gen Abdel Fattah el-Sisi, at Hyderabad House here on Wednesday.

The two sides also decided that under the strategic partnership, they will combat extremist ideology by joining hands in areas such as de-radicalisation and also come down hard on terrorism which, the both sides agree, is the greatest security threat to humankind, said Prime Minister Modi.

The two leaders also resolved to step up bilateral trade with the help of mutual investments to $12 billion over the next five years.

Egypt and India also decided that though they have been cautioning the international community against the menace of terrorism, it was necessary to do some concrete work in this area, including putting an end to cross-border terrorism, said Modi while reiterating his call to resolve conflicts though diplomacy and dialogue.

The two leaders witnessed the signing of five agreements, including a memorandum of understanding between the Indian Computer Emergency Response Team and the Egyptian Computer Emergency Readiness Team in the area of cyber security. They also inked a memorandum of cooperation in the field of information technology. Three MoUs were signed in the areas of culture, youth matters and broadcasting.

Sisi arrived here on Tuesday on a three-day state visit that seeks to turn around ties. Egypt is a key player in the politics of both the Arab world as well as Africa and is also seen as a gateway to markets in Africa and Europe.

The Egyptian President will be the chief guest at the Republic Day celebrations on January 26. He is accompanied by a high-level delegation, including five ministers and senior officials, while a military contingent is here and has practised with its Indian counterparts before its participation in the Republic Day parade.

Earlier, Sisi was accorded a ceremonial welcome at the Rashtrapati Bhavan and was received by President Droupadi Murmu. He also laid a wreath at Rajghat. External Affairs Minister S Jaishankar also called on Sisi.