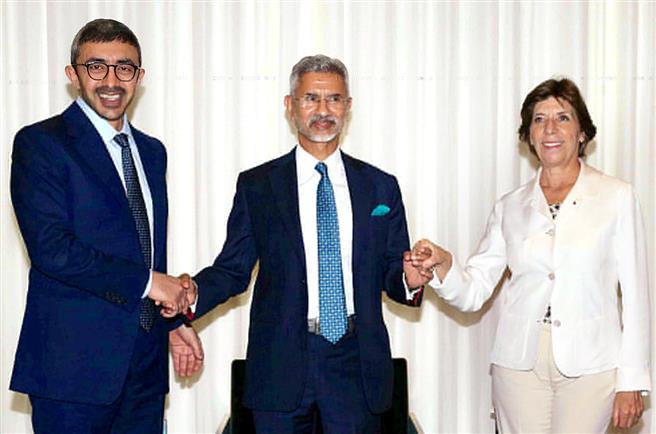 India, the UAE and France held their first trilateral Foreign Ministers’ meeting in New York on the sidelines of a UN General Assembly (UNGA) session and discussed a new and more contemporary way of doing diplomacy with a focus on “active exchange” of ideas between strategic partners and UNSC members.

Jaishankar had arrived in New York on Sunday to participate in the high-level 77th session of the UNGA, which started on Tuesday with the opening of the General Debate.

Jaishankar also met Egyptian Foreign Minister Sameh Shoukry. His first meeting was with Argentina’s Foreign Minister Santiago Cafiero, who is the president pro tempore of the Community of Latin American and Caribbean States, along with Foreign Ministers Mario Adolfo Bucaro Flores of Guatemala and Amery Browne of Trinidad and Tobago.

He met Indonesian Foreign Minister Retno Marsudi with both sides exchanging notes on G20 cooperation. Indoensia is the current chair of G20 and will hand over the presidency to India later this year. Jaishankar also met Foreign Minister Ian Borg of Malta, with which India shares commonwealth ties.

In his meeting with the Cuban Foreign Minister, Jaishankar expressed his willingness to continue strengthening bilateral cooperation and developing economic, trade and investment ties.