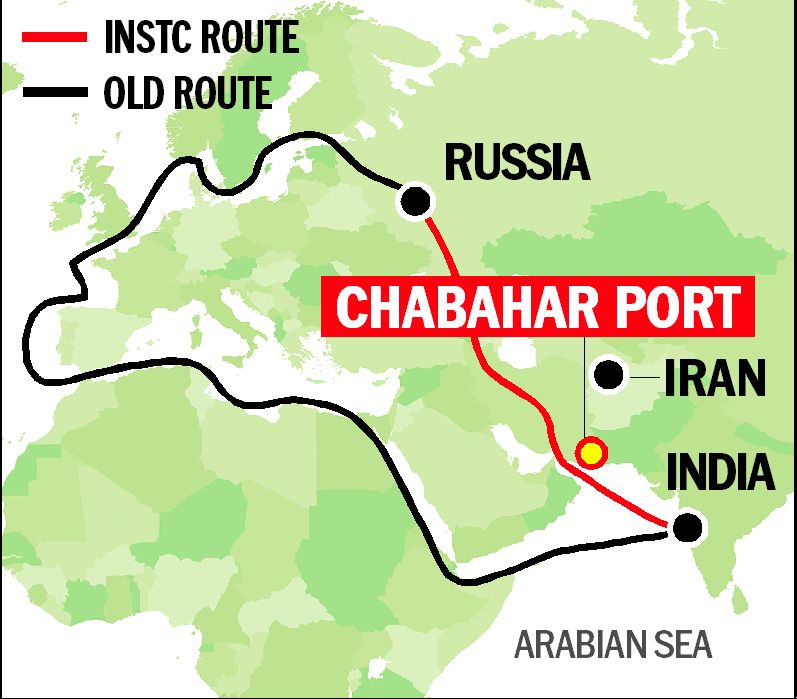 Map not to scale

Foreign Secretary Vinay Kwatra spoke to Ali Bagheri Kani, Iran’s Deputy Minister for Political Affairs, on Tuesday, the latest in a series of high-level talks in order to activate a shorter and sanctions-proof route between Russia and India. Almost a dozen countries in Central Asia and the Caucasus will also benefit from the route.

The two sides discussed various elements of bilateral relations, including progress on the Chabahar Port. “They also discussed international and regional issues, including Afghanistan,’’ said an MEA statement. The telephonic conversation comes a fortnight after Iran’s state-run shipping company said it had successfully completed the first transit of Russian goods to India using the International North-South Transportation Corridor (INSTC). India has requested for the Chabahar Port to be brought under the INSTC ambit. Touching on the importance of the INSTC last week, Russian President Vladimir Putin recently said Moscow would pay more attention to it as it could help make the Caspian basin the hub of energy and logistics. Significantly, ONGC Videsh Limited had a stake in the Satpayev oil block, but decided to exit after it could not find commercially exploitable oil. Interestingly, all 18-odd countries touched by the INSTC route have never been active backers of unilateral sanctions announced periodically by the West.

Last month, Iranian Foreign Minister Hossein Amir-Abdollahian had visited India and held talks on regional connectivity which entailed reviewing the progress made at the Shahid Beheshti terminal, Chabahar that will provide sea access to landlocked Afghanistan and emerge as a commercial transit hub for the region, including Central Asia.

As if in acknowledgement of the developing ties, a few days later India abstained from voting against Iran at the International Atomic Energy Agency board meeting.

Last month, a test cargo of 41 tonnes of wooden laminate sheets left St Petersburg for the Russian port of Astrakhan and from there, it was shipped to Iran’s Anzali Caspian port. It was then taken by road across Iran to Bandar Abbas from where the cargo was shipped to Mumbai. The entire journey took 24 days and is likely to become quicker once the trans-Iranian railway is completed.

Traditionally, shipments from South Asia go via the Suez Canal to the ports of Rotterdam (The Netherlands), Antwerp (Belgium), Piraeus (Greece) and Valencia (Spain). All of these places are amenable to the West’s diktat on unilateral sanctions.