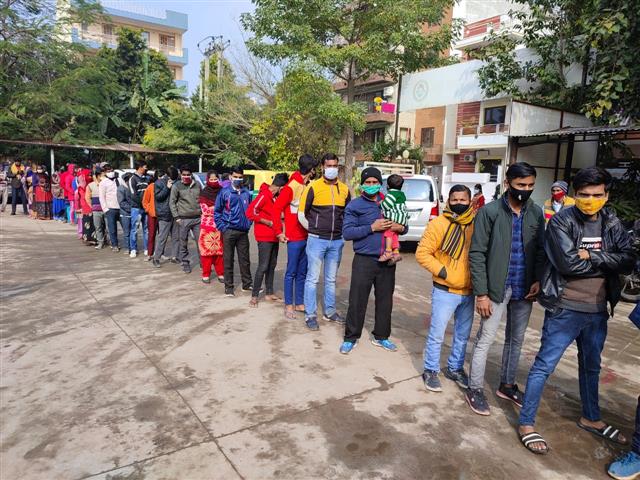 India will likely cross the peak of the second Covid wave but is fully prepared to handle the surge, government sources assured on Monday as daily cases neared 1.8 lakh (1,79,723) and active cases jumped to 7,23,619 as against 5,90,611 on Sunday.

At the height of the second wave, India had recorded 4,40,000 daily cases on May 7, the highest since the onset of the pandemic.

Government sources said though the current trajectory of the surge worldwide (US reporting 8 lakh cases a day, France 3 lakh, UK 2 lakh) indicates that India is "bound to cross the 4.4 lakh daily cases it hit at the peak of the second wave, there is no cause to panic as the government’s preparation this time is two to three fold higher than that in 2021."

Also, omicron infection continues to be mild with nearly 40 per cent of India’s current omicron patients (4,031 as of Monday) fully recovered.

“The infection in the current wave appears to be mild and people who get Covid should recover easily following the home isolation guidelines put up on the health ministry website,” said a government source adding that hospitalisations in the current wave are one fourth of what was seen in the second wave, if Delhi alone is taken as a test case.

The health ministry data show the country’s medical oxygen capacity since the height of the second wave has also doubled from 9,500 MT on May 27, 2021 to 19,236 MT a day.

“The highest number of fresh cases India saw was around 4 lakh on May 7. We are bound to cross that but are much better prepared to deal with Covid than we were in 2021. The medical oxygen capacity available today is double of the peak of the second wave (9,500 MT on May 25). We do not know if we will even need that much medical oxygen with omicron as it is an upper respiratory tract infection. As a country we are prepared two to three times on all indicators,” a senior government official said adding that people need to mask up to protect them from getting sick.

Government sources said many modelling studies had been done in India to predict the peak and evidence from South Africa, which first reported omicron, shows the case graph rises with alarming steep and then falls with an equal velocity.

The situation is evolving all over the world but we need to be prepared for no matter what the numbers are, a source said, with another adding that the US is seeing 8 lakh cases a day, France 3 lakh a day and the UK 2 lakh a day.

“The message is that there is no cause for panic. We may cross the figures of the second wave but we are prepared to take up any challenge. This infection is mild and will subside with precautions and home isolation,” an official said.

Omicron-induced Covid cases worldwide were the highest on January 7 since the start of the pandemic in early 2020.

The government on Monday cited a WHO advisory which says omicron has a growth advantage over delta with a doubling time of two to three days and the incidence of new cases is much higher.

Official sources said masking is a great protection along with vaccination.

A US Centre for Disease Control study has shown that an infectious dose of Covid spreads in 15 minutes if neither the patient nor the one at risk are wearing a mask.

If both are wearing a loosely fitted N 95 mask, infection will take 25 hours to spread and if they are wearing tightly sealed masks they will get 2,500 hours of protection.

“The message is mask up. Even a triple-layer mask is good. Some protection is good,” said an official noting that daily new cases had risen over 28 times since omicron was reported in late November and daily positivity rate has gone up from less than 1 per cent for several months to 13.27 per cent on Monday.

It was 7.9 per cent for the whole of last week.

However, India has yet seen one death from omicron in Rajasthan.

Overall, India has reported 4,031omicron cases as of Monday with 1,552 recoveries.

No reason to panic: Why

*India is much better placed today than during the second wave to tackle Covid. Over 151 crore vaccine doses have been administered and vaccines are known to protect against severe disease and death; 92 pc adults (86.08 cr) have received the first dose and 67 pc (63.2 cr) both doses; 31 pc child population (2.29 cr) aged 15 to 18 years already vaccinated with the first dose

*Hospitalisation with omicron one fourth of second wave average

25 districts of concern with higher than 10 per cent positivity