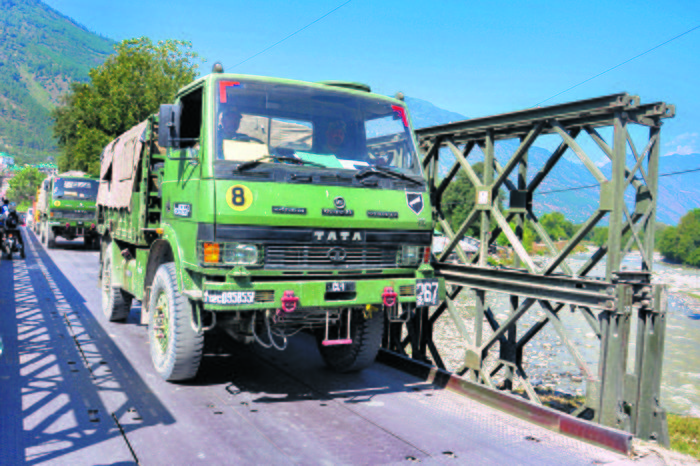 An Army convoy moves towards Ladakh on the Manali-Leh highway.

India on Tuesday again rejected a Chinese statement affirming a “1959 claim line’’ as the border between the two countries in Ladakh and asked the neighbouring country to refrain from advancing an "untenable unilateral" interpretation of the de-facto border.

New Delhi has been consistently rejecting the Chinese offer to settle the border in Ladakh according to the line espoused by then Chinese Premier Chou en-Lai in 1959.

A Ministry of External Affairs (MEA) spokesperson said India had never accepted the “so-called unilaterally defined 1959 Line of Actual Control (LAC)’’, a position that is consistent and well known, including to the Chinese side.

India also pointed out that the Chinese furtherance of the so-called 1959 line proposal ran counter to several agreements that were framed to reach a common understanding of the LAC alignment.

After engaging in an exercise to clarify and confirm the LAC, the process could not proceed after 2003 as the Chinese side did not show a willingness to pursue it, the MEA regretted.

It pointed out that at the last high-level meeting between the two Foreign Ministers in Moscow on September 10, China had reiterated its commitment to abide by all the existing agreements. These include the

1993 Agreement on Maintenance of Peace and Tranquility, the 1996 Agreement on Confidence-Building Measures (CBMs) in the military field, 2005 Protocol on Implementation of CBMs and 2005 Agreement on Political Parameters and Guiding Principles for settlement of the India-China Boundary Question.

The present security scenario along our northern frontiers is at an uneasy no war, no peace status. — Air Chief Marshal RKS Bhadauria

All these pacts commit India and China to clarification and confirmation of the LAC to reach a common understanding of its alignment, it said. “Therefore, the insistence now of the Chinese side that there is only one LAC is contrary to the solemn commitments made by China in these agreements,’’ noted the MEA statement.

Making it clear that the Indian side had always respected and abided by the LAC, the MEA said Defence Minister Rajnath Singh had stated in Parliament that Chinese troops had tried to transgress the LAC in several parts of the western sector in an attempt to unilaterally alter the status quo.

As China has repeatedly said the current situation should be resolved in accordance with the agreements signed between the two countries, “we, therefore, expect that they will sincerely and faithfully abide by all agreements and understandings and refrain from advancing an untenable unilateral interpretation of the LAC,’’ added the MEA statement.

Incidentally, China had last spoken of the 1959 line after troops had scuffled along the Pangong Lake in August 2017.