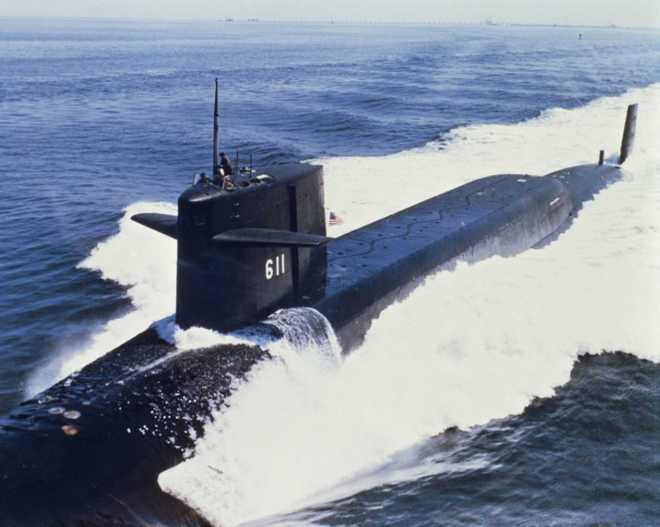 Pakistan’s military on Tuesday said its navy blocked an Indian submarine from entering into the country’s waters last week, a claim dubbed by New Delhi as “absurd”.

Pakistan’s military on Tuesday said its navy blocked an Indian submarine from entering into the country’s waters last week, a claim dubbed by New Delhi as “absurd”.

The incident occurred on October 16 when an Indian submarine was detected by a Pakistan navy patrol aircraft, the Pakistan military said in a statement. It said during the prevailing security milieu, a strict monitoring watch had been kept by the Pakistan navy to safeguard maritime frontiers of the nation.

According to the statement, it’s the third such incident when an Indian submarine had been prematurely detected and tracked by the Pakistan navy’s long-range maritime patrol aircraft. The army also shared a short footage of the purported incident. A similar incident was last reported in March 2019 when the navy thwarted an attempted entry by an Indian submarine, the statement claimed.

Sources in India shot down the claim by questioning the short footage of the purported incident put out by the Pakistani side. “The submarine has been shown with its snorkel outside, which means that it is unafraid of being detected. This is hardly the approach to be followed by a submarine that is entering hostile waters,” they said.

New Delhi also rubbished as a lie the Pakistani statement claiming that this was the third such incident of an Indian submarine getting detected and tracked by Pakistan navy. But the implication of the sources here was Pakistan was circulating a dated footage of an Indian submarine with its periscope up, which meant either it was in an emergency or it wanted to announce its presence. In either case, it could have scarcely been threatening. In the best scenario, it was announcing its presence and in the worst seeking help, Indian sources said. — TNS/PTI