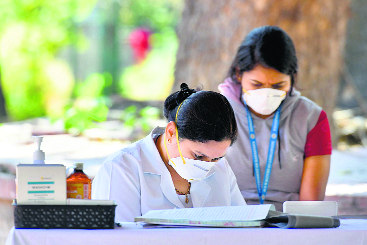 ‘All Wuhan evacuees have tested negative’

As of today, 1818 flights have been screened and 1,97,192 passengers.. All 647 Indians evacuated from Wuhan have tested negative for the disease.

Health Minister Harsh Vardhan informed Parliament that India’s apex medical research body – Indian Council of Medical Research – with a network of labs was ready with offers to do testing for South East Asian Region countries and Maldives was already being assisted.

“Request from Afghanistan for samples testing has been agreed to. We have also agreed to provide technical assistance to Bhutan in managing this infectious disease and screening of passengers also,” Vardhan said in the Lok Sabha today.

In the first update to Parliament on CoV outbreak in China on December 31, 2019, Vardhan said India had tested 1,510 samples and 1507 samples were negative. “Three samples were positive and 27 samples are under process. All three positive patients had a travel history to Wuhan and are in Kerala. They are stable,” the Minister said.

The disease has caused 37,198 cases and 811 deaths in China and 354 cases outside China in 27 countries. “All suspected or probable cases of n-CoV must be treated in isolation,” he said adding that the disease could show two weeks to manifest and its symptoms were fever, cough, and difficulty in breathing.