India is moving quickly from being the world's largest importer of defence equipment to an exporter, the Defence Minister said 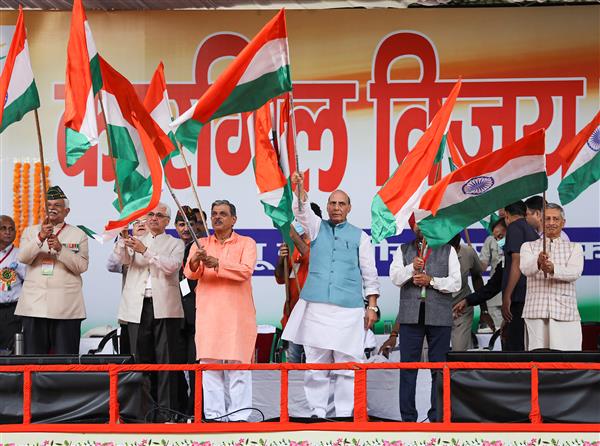 Defence Minister Rajnath Singh on Sunday announced the setting up of joint theatre commands of the tri-services to enhance coordination among the armed forces.

The defence minister also said India is moving quickly from being the world's largest importer of defence equipment to an exporter.

He was speaking during a programme organised by the Jammu Kashmir People's Forum here to pay tributes to the martyrs of the Indian Armed Forces.

"Keeping in view (joint operations as seen in Operation Vijay in Kargil), we have decided to set up joint theatre commands (in the country)," Singh said.

Paying tributes to the Kargil martyrs, the defence minister said the country cannot forget their supreme sacrifice to safeguard the country's territorial integrity and sovereignty.

"It is the duty of the society and the people to give their utmost respect to the martyrs and their families," he said.

"Whatever support you can offer, do to for their families. It is the responsibility of each citizen," he added.

Singh is scheduled to hold a special meeting with a select gathering of the BJP leaders at the party office in Trikuta Nagar to take stock of the party's preparations for the assembly elections.

He will also be briefed about the security situation and political developments.

This is Singh's second visit to Jammu in a little over a month. He visited the region on June 17 on the occasion of the 200th year of coronation of Maharaja Gulab Singh.