India will not cede an inch of land to anyone: Rajnath Singh : The Tribune India

India will not cede an inch of land to anyone: Rajnath Singh 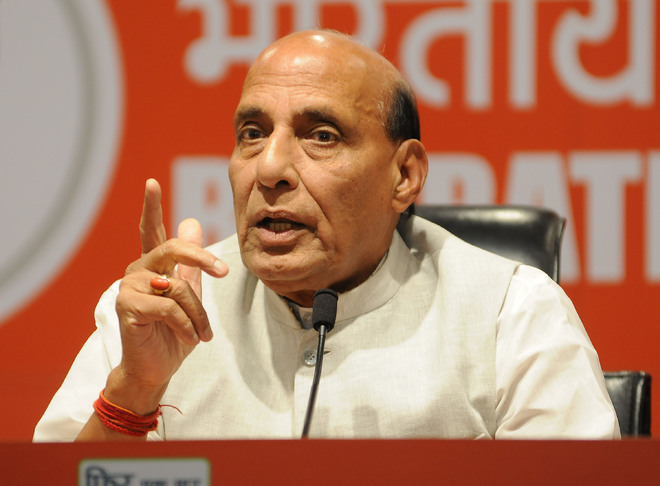 Defence Minister Rajnath Singh on Saturday said India will not cede even an inch of its land to China and hoped that the remaining issues relating to the eastern Ladakh border standoff between the two countries will be resolved through dialogue.

Singh also said that India will give a befitting reply to anyone threatening its unity, sovereignty and territorial integrity as it no longer remained a “weak” country.

“Our political opponents keep raising certain questions without fully knowing the facts,” he said referring to the opposition’s criticism of the government on the eastern Ladakh standoff.

“I do not want to go into what happened during the 1962 Sino-India war. But I want to assure the country as its defence minister that not an inch of land can go to China’s occupation when we are there (in the government),” Singh said at an event organised by the Zee News.

He said the NDA government will never compromise on the country’s pride and reputation at any cost.

The defence minister also said that the Russia-Ukraine conflict has shown that if war takes place in any part of the world, it will have to be fought between the parties engaged and no third country would get involved easily.

The eastern Ladakh border standoff began in early May 2020 following violent clashes between Indian and Chinese troops in the Pangong Tso area.

As a result of a series of military talks, the two sides completed the disengagement process last year on the north and south banks of the Pangong lake and in the Gogra area. However, the face-off continues in certain friction points.

The defence minister said friction between troops of the two sides takes place largely because of China’s perception of the Line of Actual Control (LAC).

“Discussions have taken place on certain issues and we have succeeded on some of them. Discussions are underway on one or two issues. I am confident that we will achieve success on them as well. There is no need to get disappointed as yet,” he said.

Singh said India is now a powerful country and will deal with those who threaten its sovereignty and territorial integrity. “India has not remained a weak country like before. It has become a powerful country. India has neither attacked any country in the world nor it has captured an inch of land of others...But I can say, India will give a befitting reply if anyone attempts to threaten its unity, integrity and sovereignty,” he said.

India has been insisting on the restoration of the status quo ante prior to the standoff in eastern Ladakh.

About the ceasefire with Pakistan along the Line of Control, Singh said it has been in force for over a year.

“Earlier, Pakistan used to violate ceasefire after entering into it earlier. It has been over a year since the ceasefire came into force but Pakistan has not been able to muster the courage to violate it. It is working,” Singh said while talking about India’s stature.

The defence minister also said that the Left-wing extremism is in its lowest level now.

The cycle of violence has almost come to an end in the North Eastern region as well.