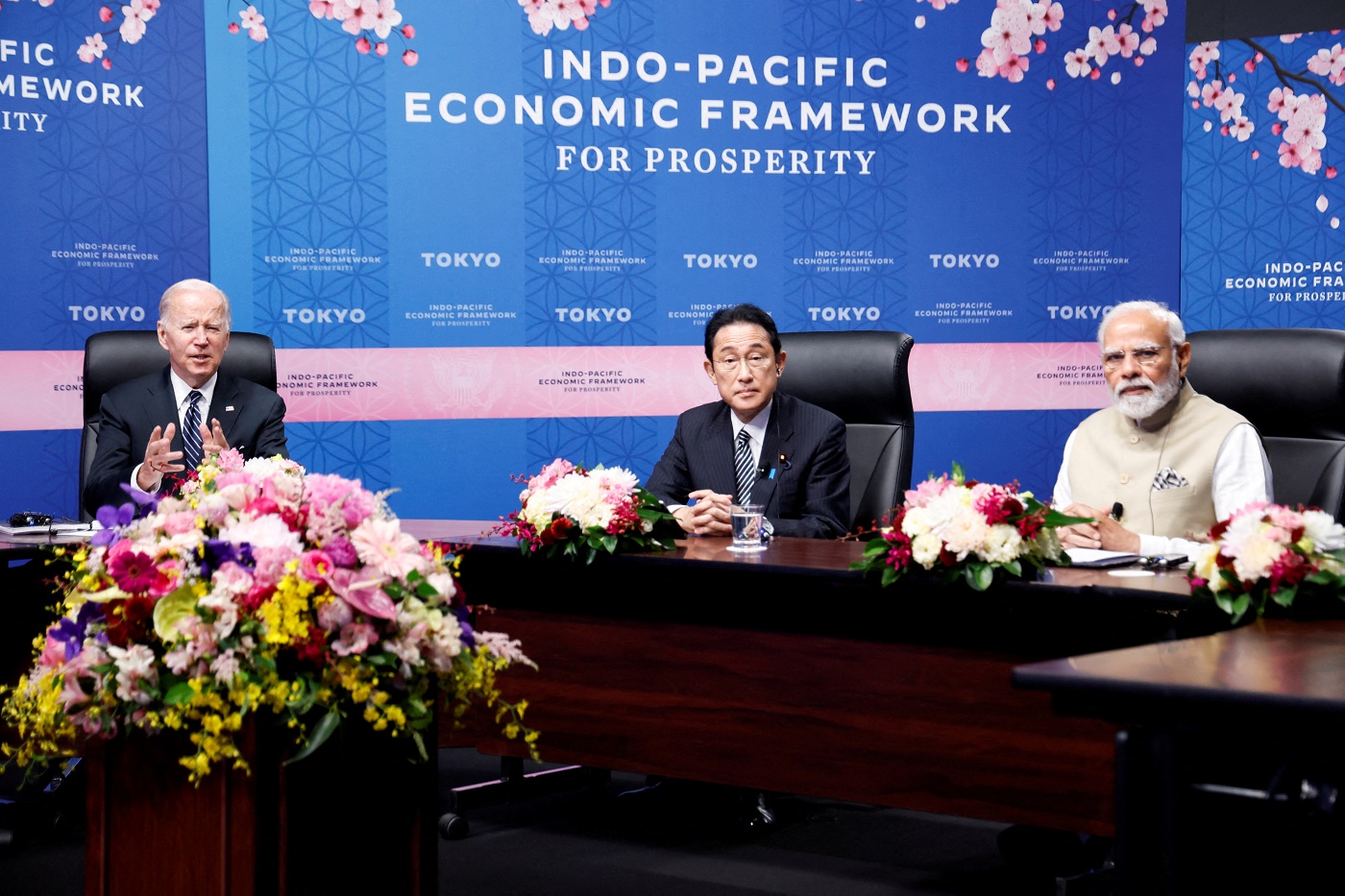 India on Monday joined a US-led initiative to set up an Indo-Pacific Economic Framework (IPEF) to bind partner countries to achieve common goals with Prime Minister Narendra Modi asserting that New Delhi will work towards making it an “inclusive and flexible” structure to pave the way for peace and prosperity in the region.

Rolling out the IPEF a day ahead of the Quad summit, US President Joe Biden said 12 countries have joined the new initiative and that the US is deeply invested in the Indo-Pacific and that it is committed for a long haul to championing its vision for a positive future for the region.

In his comments during the launch ceremony, Prime Minister Modi said that announcement of IPEF is a declaration of a collective desire to make the Indo-Pacific an engine of global economic growth and called for finding common and creative solutions to tackle the economic challenges of the region.

He also underlined that the foundation of resilient supply chains must be based on 3T’s—trust, transparency and timeliness.

“India will work with all of you to build an inclusive and flexible Indo-Pacific Economic Framework. I believe that there should be three main pillars of resilient supply chains between us: trust, transparency and timeliness,” Modi said.

“I am confident that this framework will help strengthen these three pillars, and pave the way for development, peace and prosperity in the Indo-Pacific region,” he said.

“Took part in the programme to launch of the Indo-Pacific Economic Framework (IPEF), which will play a key role in furthering growth in the Indo-Pacific region,” the prime minister tweeted later.

The IPEF seeks to strengthen economic partnership amongst participating countries with the objective of enhancing resilience, sustainability, inclusiveness, economic growth, fairness, and competitiveness in the Indo-Pacific region besides cooperating on anti-corruption efforts.

The rollout of the IPEF came as part of Washington’s efforts to push forward a strong economic policy for the Indo-Pacific to counter China’s aggressive strategy on trade in the region.

“The Indo-Pacific Economic Framework is a declaration of our collective will to make the region an engine of global economic growth. I thank President Biden very much for this important initiative,” Modi said.

The prime minister said India has historically been at the centre of trade flows in the Indo-Pacific region, having the world’s oldest commercial port in Lohtal, Gujarat.

The Ministry of External Affairs said that partner countries of the IPEF will begin discussions focusing on strengthening economic cooperation and achieving shared goals.

In his remarks, Biden the future of the 21st-century economy is going to be largely written in the Indo-Pacific and that was the reason behind the launch of the initiative.

“The Indo-Pacific covers half the population of the world and more than 60 per cent of the global GDP.  And the nations represented here today, and those who will join this framework in the future, are signing up to work toward an economic vision that will deliver for all peoples,” he said.

In a joint statement, the partcipating countries said that the purpose of the initiative is to advance resilience, sustainability, inclusiveness, economic growth, fairness, and competitiveness of their economies.

“Today, we launch collective discussions toward future negotiations on the following pillars.  Framework partners will be engaging in such discussions on various ways to strengthen economic cooperation to achieve these goals, and we invite other interested Indo-Pacific partners to join us,” the joint statement said.

Specifically referring to trade, the countries said they seek to build high-standard, inclusive, free, and fair trade commitments and develop new and creative approaches in trade and technology policy that advance a broad set of objectives to fuel economic activity and investment.

On supply chains, the countries said:”We are committed to improving transparency, diversity, security, and sustainability in our supply chains to make them more resilient and well-integrated.” “We seek to coordinate crisis response measures; expand cooperation to better prepare for and mitigate the effects of disruptions to better ensure business continuity; improve logistical efficiency and support; and ensure access to key raw and processed materials, semiconductors, critical minerals, and clean energy technology,” the statement said.

The countries also identified clean energy, decarbonisation and infrastructure as major areas of cooperation. “In line with our Paris Agreement goals and efforts to support the livelihood of our peoples and workers, we plan to accelerate the development and deployment of clean energy technologies to decarbonise our economies and build resilience to climate impacts,” the statement added.

“This involves deepening cooperation on technologies, on mobilising finance, including concessional finance, and on seeking ways to improve competitiveness and enhance connectivity by supporting the development of sustainable and durable infrastructure and by providing technical assistance,” it said.